U.S. Rep. Ted Lieu (D-Torrance) joined the Miracle Mile Chamber of Commerce on May 3 at the El Rey Theatre to talk about some of the issues he’s addressing in Congress. A panel of representatives from Museum Row also took the stage to discuss the subway construction making its way along Wilshire Boulevard and how the museums are adapting. 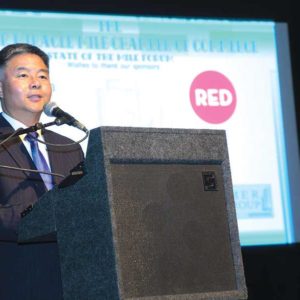 With highly publicized battles about infrastructure and immigration unfolding between the White House and Capitol Hill, the congressman is also raising awareness for lesser-known issues involving cyber security.

For a “60 Minutes” segment he participated in, the show’s staff gave him an iPhone to use and was able to acquire text messages and see Lieu’s location, even though the phone’s GPS function was turned off.

The Signaling System No. 7 flaw, or SS7 flaw, has enabled cybercriminals to steal personal information from cell phone users, needing only their names and cell phone numbers. Lieu said there are encryption apps that can add a layer of security. Ordinary citizens are not at that great of a risk compared to CEOs of large companies, government officials or other people who might be of interest to a crime syndicate or foreign government, he said.

“Many decades ago, when countries set up their telecom networks we all assumed that every telephone network was going to be what was known as a trusted network,” Lieu said.  “Well now it turns out that some of these networks are owned by countries like Iran, Russia, North Korea and others. And if you simply have a telephone network, you can listen in on the cell phone conversations of anyone [by] just knowing their cell phone number. You can also track the location and you can acquire their text messages.”

The FCC has been dealing with the issue, and last year urged communications service providers to use security best practices recommended by the Communications Security, Reliability, and Interoperability Council, a federal advisory committee to the FCC.

“They’re trying to fix it, and it’s not that easy,” Lieu said.

Subway construction along Wilshire Boulevard has coincided with the Academy Museum’s own construction as it plans to open its doors next year. 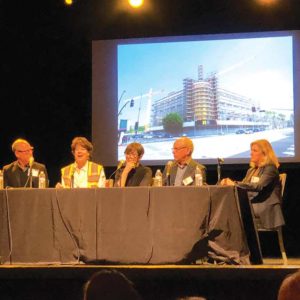 Museums including LACMA, the Craft and Folk Art Museum and the Petersen Automotive Museum joined a panel to discuss the Purple Line Extension construction. (photo by Luke Harold)

“We work our way around Metro construction, we bring donor prospects to the site, donors to the site, visitors and VIPs to the site,” said Katharine DeShaw, the Academy Museum’s managing director of advancement and external relations. “Our staff of about 50 are very actively in the neighborhood.”

The Los Angeles Metropolitan Transportation Authority’s Purple Line Extension project, which will extend the subway to Westwood, is scheduled for completion in 2026. Metro launched its “Eat, Shop, Play” campaign to promote businesses affected by ongoing construction for the Purple Line, and the Regional Connector and Crenshaw/LAX transit projects.

Phase 1 of the Purple Line project, scheduled to open in 2023, will take the subway from Western Avenue to La Cienega Boulevard, via Wilshire Boulevard. Earlier this year, Metro broke ground on Phase 2, from Wilshire and La Cienega boulevards to the Century City/Constellation Boulevard station. The $2.53 billion segment is expected to be completed in 2025.

Suzanne Isken, executive director of the Craft and Folk Art Museum, mentioned the partnerships the museum has with local parking lots for the convenience of visitors.

“Living in a vibrant city like L.A., construction and traffic are just part of our lives,” she said. “I imagine it’s kind of like being pregnant. It’s very, very inconvenient, but in the end it’s pretty life-changing, and I think we’re going to end up with a Metro and some great museums.”

Leslie Kendall, curator at the Petersen Automotive Museum, said he’s known “almost nothing but change” with the renovations and changes to accommodate new exhibits that the Petersen has undergone.

John Rice, marketing director at LACMA, highlighted some of the museum’s upcoming exhibits and ensured it would continue to be a “vital magnet” on the Miracle Mile.

“Our audiences of course come from throughout L.A., California and internationally,” he said. “And that will continue to be the case.”