Lyn MacEwen Cohen, president of the First-In Fire Foundation and the Miracle Mile Civic Coalition, has been honored by the Los Angeles Fire Department as “Honorary Fire Chief 2018” for her service benefitting the department. Cohen had previously been awarded the honor in 2006 and 2012. 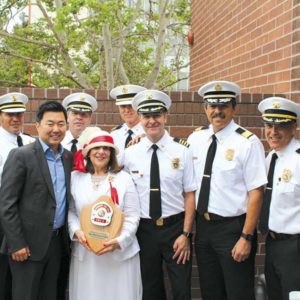 LAFD Fire Chief Ralph Terrazas presented the award at the Fire Station 29 Centennial Groundbreaking Ceremony on May 12. The event coincided with the 62nd annual Fire Service Day, which featured a celebration of community service at LAFD fire stations.

“I am honored to support our firefighters who serve us so courageously and so well,” Cohen said.

Through the First-In Fire Foundation, Cohen has brought together residents with their local firefighters, raised funds for the LAFD and local fire stations, and advocated for emergency preparedness. For information, visit firstinfirefoundation.org.