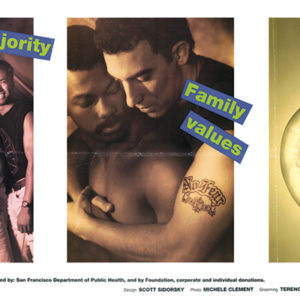 A safer sex announcement from the San Francisco AIDS Foundation is included in the new exhibit in West Hollywood. (photo courtesy of the ONE National Gay & Lesbian Archives at the USC Libraries)

The exhibit features safer sex posters, comics, brochures, videos, PSAs and other archival items from the collections of the ONE National Gay & Lesbian Archives at USC Libraries. During the AIDS crisis in the 1980s and 1990s, widespread public perception linked AIDS to gay men and intravenous drug users. “Lost & Found” reveals how activists sought to educate and empower people about the pervasive epidemic.

Rather than stigmatize sexuality, the educational projects often went hand-in-hand with sex-positive practices. “Lost & Found” shows how the dissemination of information sought to cross cultural, economic, linguistic and class divisions.

While the majority of materials were produced in the 1980s and 1990s, the exhibition also connects them to the ongoing AIDS crisis through contemporary artists and activist projects. “Lost & Found” is co-curated by David Evans Frantz, curator at ONE National Gay & Lesbian Archives at the USC Libraries, and independent curator Hannah Grossman. The exhibit is on display Thursday through Sunday from 11 a.m. to 2 p.m. and 3 to 6 p.m. at the ONE Gallery West Hollywood, 626 N. Robertson Blvd. For information, visit onearchives.org.