The Los Angeles City Council on May 22 approved a five-year agreement with SMG to operate the Greek Theatre in Griffith Park for concerts, community events and concessions. 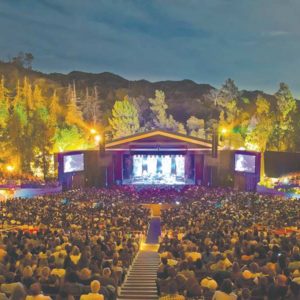 Department of Recreation and Parks
The Greek Theatre will continue to be operated by SMG under a contract approved by the Los Angeles City Council. (photo courtesy of the Los Angeles)

The agreement includes a $4 million capital improvement plan for the Greek Theatre as well as traffic, sound and infrastructure improvements. SMG has been overseeing day-to-day operations at the venue since 2015 under a partnership with the Los Angeles Department of Recreation and Parks. The city of Los Angeles owns the theater.

“I am thrilled to announce a new agreement between the city and SMG to operate our storied Greek Theatre,” Councilman David Ryu, 4th District, said. “This substantive agreement, which includes $4 million in improvements, is the result of a robust process which strived to meet the needs of the theater and the surrounding community.”

“We are proud of the new agreement with SMG to assist with the daily management our iconic and historic Greek Theatre,” Schull said. “This agreement will bring real improvements to the Greek and ensure this remains a cherished venue for the city of Los Angeles and a first class experience for our patrons and the surrounding community members.”

The process to create a new agreement began last November with an open request for proposals. The two finalists, SMG and Oak View Group, presented proposals in March. OVG’s bid committed $1.1 million in capital improvements, and SMG committed to $4 million dollars in improvements, including renovations to three of the decks and concession stands, enhanced entrance and security, and the replacement of every seat in the venue.

The agreement with SMG has resulted in increased revenue for the city. In 2016, the first full year of operations under SMG, the city received $5.2 million, and $5.5 million in 2017. The totals exceed the $1.6 million the city received annually on average under a previous contract with Nederlander, which operated the venue for 40 years.

The agreement stipulates that SMG collects revenues from ticket sales, sponsorships, merchandise sales and concessions, and shares a percentage of each with the city. The amounts taken in vary from year to year, but the percentages stay the same, said Mark Pampanin, a spokesman for Ryu. SMG gives the city 43 percent of concession sales, 30 percent of merchandise sales, 80 percent of sponsorship fees, 100 percent of fees generated by filing at the venue, and $5 from each ticket sale. The company deducts $2 million that SMG receives under contract from the city for operational costs and staffing. The money given annually to the city is the amount after deductions for operations.

The recently signed contract is for operations beginning in 2019 and includes an option for the city to later renew the agreement for another five years. Under the agreement, SMG also committed to host monthly meetings with nearby community groups, use sound monitoring services to study and reduce sound impacts on neighbors, and implement a hot-line for community members to contact SMG senior staff.

Additionally, the agreement includes increased staff for parking, security and event management. SMG is also exploring offseason opportunities to increase revenue for the Department of Recreation and Parks, including tours of the 88-year-old theater.

“Operating the Greek Theatre is about more than just running a music venue,” Ryu said. “It’s about serving the neighborhood, providing an unforgettable experience for visitors and ensuring the legacy of this cultural institution continues to make our city proud.”

Miriam Dodge, president of Friends of Griffith Park, said the new agreement will help usher the venue into the future. She said after initial trepidation, the organization supports the theater’s operational partnership between the city and SMG.

“So far, we have been quite pleased with the way SMG has been handling the theater. I think they have been doing a great job,” Dodge said. “They are taking great pains to ensure it is restored in a historically responsible manner.”

Pampanin said the timeline for renovations at the theater has not been worked out. The project will coincide with seismic retrofitting the city plans to complete in the next few years. The Los Angeles City Council will approve the dates for that project, Pampanin added.

Worth its weight in gold on Wilshire