Pedestrians, equestrians and cyclists will soon be able to cross the Los Angeles River between Griffith Park and Atwater Village using a new bridge that city officials plan to complete in late 2019. 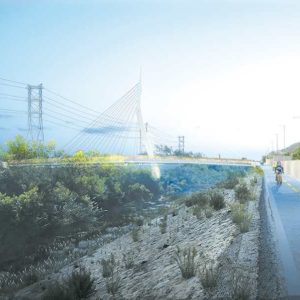 A cable-stayed bridge to be built over the Los Angeles River will provide greater access to Griffith Park. (photo courtesy of the city of Los Angeles Department of Public Works)

The multimodal bridge will connect Griffith Park to North Atwater Park on the east side of the river, where horse stables are located. The bridge will link equestrians and others to more than 55 miles of trails in the park. A groundbreaking ceremony for the bridge project was held on May 14.

“The L.A. River is an extraordinary treasure with limitless potential for the communities that surround it,” Los Angeles Mayor Garcetti said. “This bridge will give Angelenos better access to green space, creating a destination for people across Los Angeles to disconnect from city life and enjoy nature.”

Plans call for the bridge to have two decks – one for pedestrians and cyclists and another for equestrians. It will be the first steel cable-stayed bridge constructed in Los Angeles. Cable-stayed bridges feature central support towers with steel cables stretching down to support the decking.

The project will be funded through a combination of resources, including $3.6 million from the state, $6.9 million from a city public works trust fund and $4.75 million donated by philanthropist Morton La Kretz, for whom the bridge is named. The Los Angeles City Council approved the project last year.

“Together, we are writing a new chapter for Los Angeles and its river,” Los Angeles City Councilman David Ryu, 4th District, said. “We are building toward a city with better park access, multimodal movement and more people out of their cars and enjoying the great outdoors of Los Angeles. The La Kretz bridge is connecting us to that future.”

The bridge was conceptualized in 1988, when the late Los Angeles City Council President John Ferraro represented the 4th Council District. Funding never materialized, however, and the project was shelved for decades.

The new bridge is part of a revitalization plan for the river that includes replacing the concrete channel with a natural river bottom, restoring the ecosystem and creating new parks and amenities along the banks. The bridge will connect with Griffith Park on the western side using a pathway through an existing tunnel under the Golden State (5) Freeway.

“The North Atwater Bridge not only helps connect the surrounding communities to open spaces along the L.A. River, but it creates another way for Angelenos to enjoy and experience the river,” City Engineer Gary Lee Moore said. “The Bureau of Engineering is pleased to deliver another key project as part of the city’s plan for L.A. River revitalization.”

“Friends of Griffith Park is pleased that construction is finally underway on the Atwater Bridge,” said Marian Dodge, the organization’s president. “The equestrian community has been waiting for safe access to Griffith Park across the river for decades. The bridge will give them a convenient and reliable way to enjoy the miles of trails in the park. It will also allow the residents of Atwater Village a way to walk into the park to picnic, ride the merry-go-round or hike without having to hop in their cars and drive.”