Case ends against driver whose truck struck and killed officer

The Los Angeles County District Attorney’s Office has closed a case against a truck driver who crashed into a Los Angeles Police Department patrol car in 2014, killing Officer Nicholas Lee, of the LAPD’s Hollywood Division. 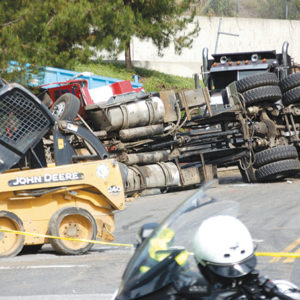 LAPD Officer Nicholas Lee died when his patrol car was struck by a truck whose driver lost control on Loma Vista Drive. (photo by Aaron Blevins)

Lee was driving through Beverly Hills to a call in the Hollywood Hills on March 7, 2014, when a truck driven by Robert Maldonado lost control on a steep grade on Loma Vista Drive and struck the patrol car. Authorities later determined the truck’s brakes failed because they were not properly maintained and the vehicle was not properly inspected, as required by law.

Maldonado, 49, pleaded no contest on April 19, 2017, to gross vehicular manslaughter, a felony. He was allowed to remain free and formal sentencing was scheduled for approximately one year later.

Last week, the court agreed to amend the charge to misdemeanor vehicular manslaughter after the defendant complied with the terms of a plea agreement, which were to not be involved in any further crimes leading to an arrest. Maldonado was sentenced to one day in county jail and placed on summary probation for five years, said Los Angeles County District Attorney Office spokesman Greg Risling.

Last May, the city of Beverly Hills agreed to a $32.5 million settlement brought by the families of people killed or injured in accidents along Loma Vista Drive. Another truck driver was seriously injured in 2014 when the brakes on his truck failed while traveling on Loma Vista Drive. A week after that collision, off duty LAPD detective Ernest Allen was killed when a cement truck driver lost control of his vehicle on Loma Vista Drive and the truck rolled onto Allen’s vehicle. The city first placed a temporary moratorium on heavy trucks on the street while a traffic and safety study was conducted. The city later lifted the moratorium when measures outlined in the study to improve safety were implemented including a runaway truck ramp and 15 mph speed limits for heavy trucks.