In his latest attempt to reform statewide housing policy, Assemblyman Richard Bloom’s bill to amend a controversial law that has been used to evict tenants and raise rents passed its first committee last week. 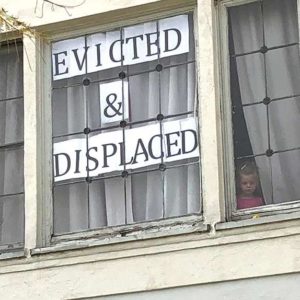 Residents on Hayworth Avenue in the Fairfax District held a protest over the multple Ellis Act evictions along the street in recent years. (photo by Luke Harold)

The Ellis Act, adopted by the state Legislature in 1985, was intended to allow landlords to leave the rental business if they were losing money. But tenants, elected officials and grassroots activists have accused developers of using the law to evict tenants in rent-controlled units and replacing them with more expensive units.

“Every year, thousands of tenants are forced out of their homes by landlords who exploit loopholes in the Ellis Act,” Bloom said in a statement. “For many tenants already pushed to the edge of the housing market, the limited restrictions in the Act are the last remaining protection from homelessness. For the Act to be truly effective, however, we must ensure that its provisions are not abused by unscrupulous landlords.”

Tenants evicted through the Ellis Act receive relocation fees from their landlords. Amounts depend on factors such as how long a tenant has lived in the unit and how much income they receive. But the costs of moving, including initial payments for a typically more expensive unit, can quickly erode those funds.

“Tenants living in rent-restricted units live with the constant threat of displacement as the cost of housing rapidly rises around them,” Bloom said. “AB 2364 gives some additional protections to these tenants and ensures that the Ellis Act is not misused.”

“The sky-rocketing rental rates in the city of West Hollywood creates a powerful incentive for owners to leave the rental market only temporarily in order to evade eviction protections and terminate long-term below market tenancies,” according to the city’s resolution.

Residents throughout the county have held protests after receiving their Ellis Act evictions, joined by their neighbors in asking their elected leaders to bolster tenants’ rights. Longtime tenants and smaller-scale areas have given way to larger buildings and an influx of wealthier tenants. Landlords throughout the state have pushed back at attempts to reform state laws, arguing in some cases that restrictions on rent hurt their ability to maintain their properties and keep up with new requirements, such as earthquake retrofitting.

In January, another bill authored by Bloom that would have repealed another controversial housing law, Costa-Hawkins, was rejected by the Assembly’s Housing and Community Development Committee. It consisted of one line stating its intention to repeal the 1995 Costa-Hawkins Act, which places limits on rent controls cities can enforce on units that were built after that year.

“I remain committed to aggressively attacking all aspects of California’s housing crisis,” Bloom said at the time.

Assemblymen David Chiu (D-San Francisco) and Rob Bonta (D-Oakland) have also introduced legislation to add protections for tenants. Bonta’s bill would enact just cause provisions for all evictions throughout the state, and Chiu’s would give tenants more time to respond to eviction proceedings, comply with terms of their lease and respond to eviction lawsuits, among other provisions.

“More and more Californians are being unjustly evicted from their homes,” Bonta said in a statement. “As California continues to endure this housing crisis, statewide Just Cause legislation is another necessary ingredient to protect tenants and keep a safe roof over their heads. The history, culture, and character of our communities suffer when residents are forced to move from home to home. A statewide Just Cause law will ensure landlords are only evicting tenants for fair reasons. We must fight to protect our neighbors and to preserve the integrity of our communities.”