A delivery ‘65 million years in the making’ 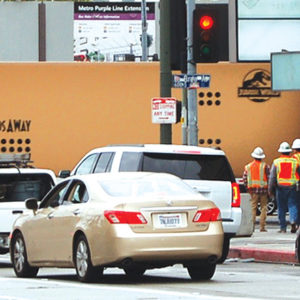 A flatbed truck carrying a large box with a Jurassic Park logo, escorted by a motorcade, drove down Wilshire Boulevard and turned up La Brea Avenue on Wednesday morning.

Based on the air holes, it could have been carrying the franchise’s biggest star: a T. rex.

The official Twitter account for the upcoming film “Jurassic World” posted pictures of the truck. The tweet read, “An Amazon delivery 65 million years in the making.” A shipping label on one side of the box addresses the package to Owen Grady and Claire Dearing, the main characters of the film.