Many Angelenos consider the chili cheese dog at Pink’s Hot Dogs on La Brea Avenue the best around, and now it’s official.

People Magazine named the chili cheese dog the best in California in its May 28 issue, which has the hot dog stand’s owner tickled pink. 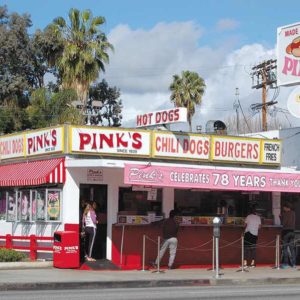 The chili cheese dog at Pink’s Hot Dogs has been named No. 1 in California. (photo by Edwin Folven)

Representatives of the magazine recently contacted Richard Pink, who operates the stand with his wife Gloria and sister Beverly, to let him know the chili cheese dog had been selected. They asked for photographs of the hot dog to feature in the magazine, but Pink had a better idea. He packaged all-beef, 9-inch stretch dogs, buns, chili, cheese, onions and mustard individually and shipped them to the magazine’s test kitchen in Alabama, where the People Magazine chefs assembled them for a photo shoot.

“They took it from there,” Pink said. “It was a complete surprise that we were No. 1 in California. It was wonderful.”

Pink’s chili cheese dog was photographed next to hot dogs from Minneapolis and Atlanta under the headline, “The Best Hot Dogs In Every State,” an article by Stephanie Emma Pfeffer. The article was a partnership between People Magazine and Food & Wine. An accompanying photo and caption about Pink’s chili cheese dog highlighted the stand’s history near the corner of Melrose and La Brea avenues since founders Paul and Betty Pink started with a pushcart in 1939.

The honor was the latest in a long list of accolades bestowed upon Pink’s, world famous for its hot dogs, many of which are named after the celebrities who frequent the stand. They include the Emeril Legasse Bam Dog – a 9-inch stretch dog with mustard, onions, cheese, jalapeños, bacon and coleslaw – and the Martha Stewart Dog – a 9-inch stretch dog with relish, onions, bacon, chopped tomatoes, sauerkraut and sour cream. Autographed photographs of the celebrities who frequent the stand adorn the walls in the dining room. Famous guests often wait in line with eager diners from around the world who flock to the stand for their favorites.

Pink’s Hot Dogs is in line for another honor soon, when the intersection of Melrose and La Brea avenue will be designated Pink’s Square. The Los Angeles City Council approved the designation in late March and the logistics are being worked out. Plans call for the crosswalks to be painted pink. The designation will likely occur later this summer.

Pink said the People Magazine honor expands the stand’s legacy and he expects it will inspire more people to eat there when visiting Los Angeles. Hot dog fans outside of Los Angeles can also enjoy Pink’s Hot Dogs, as the company has franchises in Las Vegas, Miami, New York and Ohio, as well as the Philippines. On Tuesday, Pink was on his way to Madison, Wisconsin, where a Pink’s Hot Dogs was opening at a water park.

“I am so proud to be among such an illustrious group of the best hot dogs throughout the United States,” Pink added. “We were very honored.”

AHHHHHHH, YES!
I HAD MY FIRST PINK DOGS BACK IN 1977 WHEN MY LATE FATHER TOOK ME TO PINKS AFTER LIVING IN HONOLULU, HAWAII FOR OVER 8 YEARS. HE CAME TO CALIFORNIA FROM OHIO IN 1949 TO SERVE HIS COUNTRY IN THE KOREAN WAR. IT WAS THEN THAT HE FIRST LEARNED OF PINKS.

MY FATHER TOLD ME THAT THESE HOT DOGS WERE VERRRRRY GOOD!
SINCE THEN, I HAD BEEN TO PINKS AFTER A NIGHT ON THE TOWN, TO JUST DRIVING THROUGH LOS ANGELES FROM A BUSINESS TRIP IN THE VALLEY.
I EVEN DROVE FROM SAN DIEGO TO TAKE A DATE THROUGH HOLLYWOOD THEN TO PINKS FOR SOME GOOD OLD NOSTALGIA
LOS ANGELES STYLE. YOU CAN NEVER GO WRONG WITH PINKS.

ANY TIME IS A GOOD TIME TO STOP AND EAT AT PINKS. SURE THERE MIGHT BE A LINE? BUT THAT TELLS YOU THAT PEOPLE ARE COMING BACK FOR A REASON.
ON MY LAST VISIT AT PINKS I HAD A PAIR OF HOT LINKS WITH CHILLI CHEESE AND ONIONS! AND THE SPICY LINKS HAD A GOOD BITE TO THEM, AND PINKS WORLD FAMOUS CHILLI IS UNFORGETTABLE.
DON’T TAKE MY WORD FOR IT?
PEOPLE MAGAZINE NAMED PINKS CALIFORNIAS BEST CHILLI CHEESE DOG.
MAHALO!