Broadway star and longtime Park La Brea resident Patricia Morison, known for starring roles in “Kiss Me, Kate” and “The King and I,” died on May 20 at the age of 103.

Morison moved from Park La Brea a few years ago, said John Burney, director of resident services, but left a lasting legacy. She lived in a tower apartment since 1960 but had recently been in hospice care and died of natural causes. 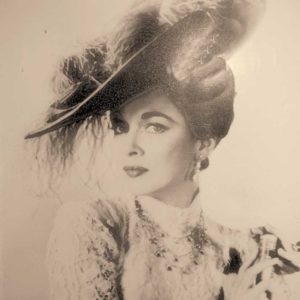 Actress Patricia Morison provided a portrait that showed the striking beauty of the former Broadway star for an article published in 2010 in the Park Labrea News and Beverly Press. (photo courtesy of Patricia Morison)

“Getting to know Patricia was an honor for me personally and professionally,” Burney said. “Seldom do you meet people who demonstrate a love for life and all that is good every time you see them. Her eyes translated her personal love as she spoke to you. To be in her presence was a gift. As excited as I was to see her each time we met, she was more excited to see me. I loved hearing her stories of the golden age of Hollywood and Broadway.”

Morison made her film debut in 1939 in “Persons In Hiding,” and followed with roles in dozens of films in the 1940s and early 1950s. She also appeared in numerous television programs from the 1950s onward.

She was perhaps best known for her role in “Kiss Me, Kate,” a Broadway production with music by Cole Porter that debuted in 1948. Porter hand-picked Morison for the role. She later starred in productions of “The King and I” with Yul Brynner, “Kismet” and “The Merry Widow,” among others.

Burney said Morison’s Park La Brea apartment was decorated with handwritten notes from some of the biggest names in music and theater, including Porter and Oscar Hammerstein. Her home was befitting of a grand dame of the stage and screen. She enjoyed a view of the Hollywood Sign from her living room window.

“Her spirit will continue to touch all of us that called her a friend and neighbor,” Burney added.

In a Nov. 18, 2010, article in the Park Labrea News and Beverly Press by Jill Weinlein, Morison recounted stories from her illustrious career. She said the first day she met Brynner, he was in his dressing room sitting naked in a Buddha-style position waiting to get his skin stained to look like the king of Siam. Morison said Brynner later told her she was a pleasure to work with. The pair starred in eight shows per week during the Broadway run of “The King and I,” and later in the production’s run in London.

Morison also recounted that one of her dresses in “The King and I” weighed 60 pounds and it took three people to help her get dressed. The dress wouldn’t fit in the dressing room so it was hung backstage.

The venerable actress also told of her early days growing up in Manhattan and studying to be an artist. She warmly recalled her work with the USO during World War II appearing with stars such as Al Jolson, Merle Oberon and Allen Jenkins.

Morison attributed her longevity to having good friends with “a lust and joy for life.” In 2010, Morison said she still enjoyed painting inside her apartment in the evenings.

Burney added that he will always remember Morison and the impact she had on him and others.

“Her love was far reaching and timeless,” he said. “We will fondly think of her often at Park La Brea.”