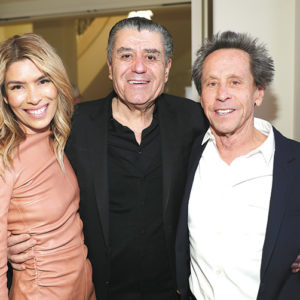 Veronica and Brian Grazer received the World of Children Board of Governors’ Award at the ceremony. They were joined by producer Haim Saban (center). (photo by Rich Polk/Getty Images for World of Children)

Television personality and actress Brooke Burke served a master of ceremonies and was joined by World of Children Ambassador Lily Aldridge Followill and Caryl M. Stern, president and CEO of U.S. Fund for UNICEF.

The special evening recognizing Veronica and Brian Grazer with the World of Children Board of Governors’ Award.

World of Children also recognized three individuals for their work with children around the world. They included Sarah Cronk, founder of The Sparkle Effect; Douglas Maclagan, founder of Child Welfare Scheme; and Dr. Elizabeth Jones, co-founder of Foundation for the Children of the Californias.