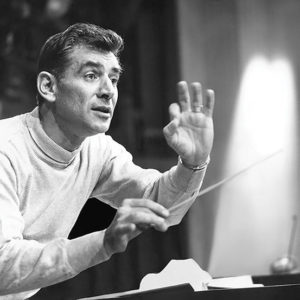 Through more than 150 objects – including photographs, papers, scores, correspondence, costumes, furniture and films, as well as interactive displays – the retrospective explores half a century of activity by the renowned American composer, conductor, pianist and humanitarian, who dedicated his life to making classical music a vibrant part of American life. It offers insight into Bernstein’s creative process and enduring legacy, including his contributions as both a pioneering educator and citizen who lent his voice to many social justice causes.

“Leonard Bernstein at 100” is curated by the Grammy Museum and will be on display at the Skirball until Sept. 2.

“Leonard Bernstein continues to have an immeasurable influence on classical music and popular culture. His achievements not only as a conductor and composer, but as an educator, musician, social activist and cultural ambassador, continue to inspire future generations of artists,” said Bob Santelli, exhibition curator and founding executive director of the Grammy Museum. “The Grammy Museum is honored to partner with the Skirball to give West Coast audiences the opportunity to revisit, discover, and pay tribute to this great American icon.”

“The Skirball is proud to join the yearlong international celebration of Leonard Bernstein’s centennial, comprising an array of arts presentations and educational programs across Southern California and around the world,” said Robert Kirschner, Skirball Museum director. “As an institution committed to celebrating American democratic ideals and promoting social justice, we are inspired by Bernstein as a cultural figure who used his prominence to advance intercultural understanding and the cause of equal rights for all Americans.”

Objects on display in “Leonard Bernstein at 100” will include Bernstein’s conductor baton and podium, his childhood piano, handwritten lyrics of “Maria” from “West Side Story” and more.

‘Stomp’ shakes things up at the Hollywood Pantages