After 13 years living in an 82-year-old French Normandy-style building on Hayworth Avenue in the Fairfax District, Dee Ann Newkirk led a protest on April 15 to oppose plans to demolish it. 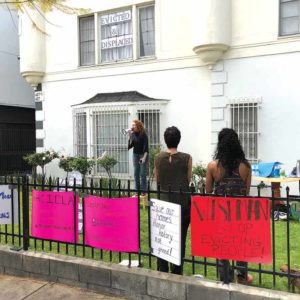 Dee Ann Newkirk led a protest in front of her now-former residence to oppose Ellis Act evictions that have reduced affordable housing. (photo by Luke Harold)

“Every renter is at risk,” Newkirk said, speaking on the front lawn of her now-former residence at 427 1/2 N. Hayworth Ave., the Spinning Wheel Apartments, with friends and neighbors lining the sidewalk.

The Ellis Act was intended to allow landlords to leave the rental business if their operations were losing money. But residents and city officials have long complained that it’s been exploited by larger developers to demolish rent-controlled units and replace them with more profitable luxury housing.

“That does not help the businesses,” said Newkirk, referring to the exodus of longtime residents. “The dry cleaners, the barbershop, the pizza people, the people in our neighborhood. We need to have long-term tenants help economies.”

Last year, Newkirk led an unsuccessful effort to have 423-427 N. Hayworth Ave. designated a historic-cultural monument by the city of Los Angeles. The Cultural Heritage Commission voted to consider the designation in January 2017, but months later the Department of City Planning said that the property does not meet any of the criteria of the Cultural Heritage Ordinance.

A number of residents, including Lynn Barton, who moved to Los Angeles with her husband in 1958, said multifamily housing such as 423 N. Hayworth, which housed four units, have defined the landscape of Los Angeles for generations.

“It features artful defined details on the exterior that stand as a work of art,” she said. “The interior is crafted with built in light sconces, original hardwood floors and beautiful molding around the ceilings. The home stands as a tribute to the history of Los Angeles.”

“This building is an important contributor to the Jewish neighborhood of Canter’s Deli and the migration of the Jewish community from Boyle Heights into the Fairfax District,” she said in an email to the city.

Councilman Paul Koretz, 5th District, a longtime critic of the Ellis Act’s modern usage, supported the historic cultural nomination. His communications director said staff members had been in touch with residents from the building throughout the process.

Other properties managed by Wiseman Residential have also been demolished after the company used the Ellis Act to vacate tenants. Last year on Formosa Avenue, in L.A.’s 4th Council District, a group of Wiseman tenants protested outside a multifamily building that had been partially demolished despite a stop work order issued by the city at the behest of Councilman David Ryu, who wanted to determine whether the owner had violated terms of the Ellis Act. Permits were reinstated one week later when the city announced that it did not find evidence of any wrongdoing.

Ben Cohanzad, a representative of Wiseman, did not respond to a request for comment.

“It’s just important that we are a symbol of what is happening in the city,” Newkirk said. “Next month, when this goes down, no one’s going to even know that it was here unless we make a stand.”

‘A Bridge Home’ for L.A.’s homeless