‘Rampage’ doesn’t add much to the action film genre

From the director of “San Andreas” comes the best-reviewed video game adaptation to date: “Rampage.” With a whopping 51 percent on Rotten Tomatoes, the video game curse is lifted. We can finally declare that a film originating in an arcade just barely has more good reviews than negative ones. A 51 percent is a passing grade for a class assignment, right? And all it takes for this Cinderella story is a giant ape, crocodile and wolf that can fly and shoot needles out of its tail. 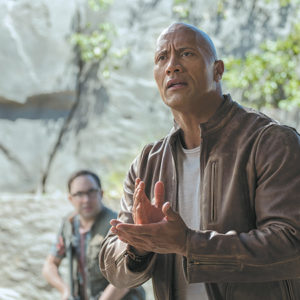 Dwayne Johnson is primatologist Davis Okoye in “Rampage,” a film based on a video game that does little to set itself apart. (photo courtesy of New Line Cinema)

Prepare to embark on a journey with your favorite blockbusting star Dwayne “The Rock” Johnson as primatologist Davis Okoye, whose best friend is George, an albino ape going through some changes. Called “DNI editing” by Dr. Kate Caldwell (Naomie Harris), the ape and a couple other creatures are exposed to a pathogen that fell to Earth from a space station destroyed by an infected rat. With that setup, how are you not already pre-ordering tickets for this film right now?

We suffer through some fake science jargon before the good stuff comes: George and his posse don’t need a jungle when they can run amok in Chicago, as if the city hasn’t been through enough. Why do they band together and start climbing buildings? Blame an evil research corporation run by Claire Wyden (Malin Akerman), the most bland of white collar villains on screen.

Less ridiculous than Claire (but still pretty ridiculous), meet the most Texan government agent Harvey Russell (Jeffrey Dean Morgan) ever, complete with a thick accent, shiny gun and a big “T” on his belt buckle. Morgan might star as the heinous “Walking Dead” antagonist Negan, but he does little more than smirk and bust out snappy one-liners (cheesy, the right word is cheesy). Sorry, in a Dwayne Johnson film, there can be only one action hero.

And Johnson delivers some truly confusing action here. This is a monster movie, yet Johnson’s Davis, a former Marine on an anti-poaching task force, finds himself taking on enormous monsters during the final showdown with a gun, something hundreds of soldiers couldn’t accomplish in the previous scene.

You might imagine a premise like this would afford some pretty great jokes. The screenwriting team (it took four people to create this mess) tries by depicting George as a snarky ape with an incredible grasp of sign language. He flips people off and makes lewd gestures. It’s all very “Transformers” humor in the easiest, most pathetic way possible. 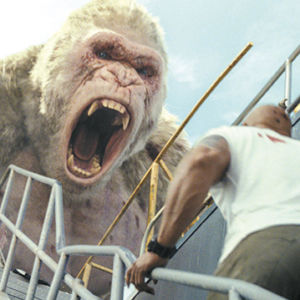 George the albino ape shows his wild side in “Rampage.” (photo courtesy of New Line Cinema)

Even more confusing, the music by Andrew Lockington is a mismatch. In place of a cleverly-used pop song to add some irony to a scene or lighthearted scoring to establish a more self-aware mood throughout the action romp, we experience a score more in line with a war film desperately trying to evoke an emotional response undeserved in this film.

If you’re one of seven diehard “Rampagers” out there who wanted to see humans transform into creatures, sorry, we only see animals get bigger. But purity is of little concern for director Brad Peyton (“San Andreas,” “Journey 2: The Mysterious Island”), whose films don’t require much thought and even less for actors to do.

Monster movies can be a lot of fun, dumb fun even. But “Rampage,” with a relatively short runtime and a lack of creative action sequences, feels less fun and more frivolous, the kind of film best left on in the background of a summer barbecue. Too bad. A flying wolf should be a sight to behold, not a mind-numbing piece of an entirely disposable film.

A culinary Jewel in Los Angeles