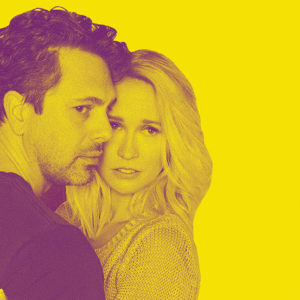 Anna Camp, of “Pitch Perfect” and “Unbreakable Kimmy Schmidt,” and Thomas Sadoski, of “Life in Pieces” and “The Newsroom,” star in the Pasadena Playhouse’s new production, “Belleville.” (photo courtesy of Davidson & Choy Publicity)

“Belleville,” in its Los Angeles premiere, is the fourth production of the 2017-18 centennial season of Pasadena Playhouse, which also serves as Producing Artistic Director Danny Feldman’s inaugural season.

The play concerns young Americans Zack and Abby. They appear to be a perfect couple, with the perfect expatriate life in Paris – a funky bohemian apartment in up-and-coming Belleville, a stable marriage and Zack’s noble mission at Doctors Without Borders to fight pediatric AIDS. But when Abby finds Zack at home one afternoon when he’s supposed to be at work, their marriage begins to show cracks as an ordinary night unravels into a modern-day thriller. Herzog’s new play is a Hitchcock-style drama, and a captivating evening of intrigue and suspense.

“‘Belleville’ continues a rich history of the Playhouse by connecting great actors and great plays,” Feldman said. “We are thrilled to be bringing one of the brightest new voices in theater to L.A. for the first time being performed by two actors at the top of their game. “

Herzog’s work has been produced at Yale Rep, New York Theatre Workshop, Playwrights Horizons, Lincoln Center, Steppenwolf and Donmar Warehouse in London, among others. She is a Pulitzer Prize finalist, a Drama Desk nominee, and has received the Best New American Play Obie Award for “4000 Miles,” the Outer Critics Award for “After the Revolution” and The New York Times Outstanding Playwright Award.

Jenna Worsham will direct “Belleville.” Worsham’s Broadway credits include associate director on “The Parisian Woman” with Uma Thurman at Hudson Theatre and “The Heidi Chronicles” with Elisabeth Moss.

“The play reveals Amy’s skill with constructing subtle devastations. It begins like a Monet painting – but by the end we’re in the world of Francis Bacon. The audience is asking, ‘How did I get here? What do I do now?’” Worsham said. “And it’s the seemingly small secrets between intimate partners that have accumulated and brought us to this point. I love this about the play – that it makes us question if we can ever really know someone, given the rich and complex interior that is the human mind.”