Los Angeles City Attorney Mike Feuer’s Blue Ribbon Panel on School Safety will convene for the first time on Sunday, April 8, from 2 to 4 p.m. in the Hollywood High School library to begin the process of studying ways gun violence such as the school shooting in Parkland, Florida, can be prevented in Los Angeles. 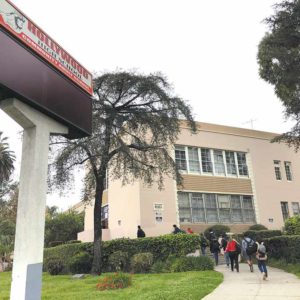 Los Angeles City Attorney Mike Feuer is holding the first meeting of his Blue Ribbon Panel on School Safety at Hollywood High School. The panel will meet in each of the LAUSD board’s seven districts. (photo by Luke Harold)

The panel, which includes 19 members with diverse backgrounds, will focus on preventing violence on campus and in the neighborhoods around schools. Feuer plans for the panel to meet in each of the seven Los Angeles Unified School District Board of Education districts over the coming weeks, with the goal of releasing recommendations in early summer. Feuer said recent school shootings prompted him to create the panel, but it also builds on decades of gun violence prevention initiatives he has been involved with while formerly serving as a Los Angeles City Council member and state assemblyman.

“Parkland was the clear catalyst, but it builds on a foundation of years of work,” Feuer said. “In my office, we spend a lot of time focusing on how to keep kids safe.”

Feuer said he is branching out from the normal duties of the city attorney’s office, such as advising and representing the City Council, drafting laws and prosecuting people who commit crimes, to addressing societal issues such as gun violence. He co-founded Prosecutors Against Gun Violence, an organization furthering gun violence prevention initiatives nationally, and was involved locally with drafting an ordinance banning the possession of high-capacity gun magazines. The city attorney’s office also prosecutes gun owners who violate a law requiring them to secure their firearms so they don’t end up in the hands of children, and Feuer launched the Neighborhood School Safety Program in 130 schools to ensure students can safely walk to and from school.

“Keeping our kids safe and secure should be our top priority,” Feuer said. “Our Blue Ribbon Panel will be traveling across our city to hear from students, parents, teachers, administrators and experts, taking a comprehensive look at LAUSD’s extensive school safety efforts and examining ways to further enhance safety on campuses and in surrounding neighborhoods.”

The panel will also feature student perspectives from Ben Holtzman, a senior at Hamilton High School who serves as the student member of the LAUSD Board of Education, and Julia Macias, a senior at Grover Cleveland Charter High School-CORE Humanities Magnet and president of the LAUSD Superintendent’s Student Advisory Council.

Feuer said members of the panel were receptive about joining the conversation about keeping students safe. The panel is first expected to hear from Zipperman and district administrators about current efforts to prevent campus violence, and will consider ways to make schools physically safer. Feuer said he is also interested in the perspectives of students, teachers, administrators and parents – whose message sometimes gets lost among national political debates over gun violence prevention. Mental health treatment and keeping guns away from people who pose a risk will also be considered. Another topic will be ways to keep guns out of the hands of students who may bring them to schools.

Feuer said he hopes the conversations will lead to recommendations for tangible solutions. A report will be issued after the panel’s final meeting. While the issues surrounding gun violence prevention at schools are complex, Feuer believes there is common ground in pursuing the goal of keeping children safe and he is optimistic about generating results.

“It’s a wide range of safety issues,” Feuer added. “I am trying to be the catalyst for a very extensive conversation.”

Community members are invited to participate in the meeting at Hollywood High School, 1521 N. Highland Ave. The next meeting will be on Saturday, April 28, at Narbonne High School in Harbor City. For information, call (213)503-6136, or visit lacityattorney.org/blueribbon.