The city of West Hollywood has debuted its new public art piece, “I SEE YOU WeHo,” by Los Angeles artist Miguel Andrisani. The mural, which was unveiled on March 28, is located in the Community Plaza of West Hollywood City Hall. 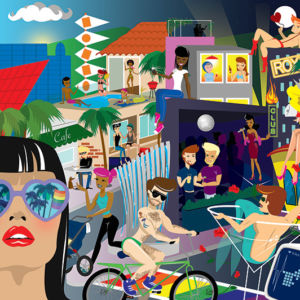 Professionally, Andrisani is a makeup artist. In his artwork, he currently is exploring the digital medium of illustration, allowing his passions for the sea, mermaids and adventurous storytelling come alive. For this mural, Andrisani found inspiration in the poem “I Sing the Body West Hollywood,” a poem created by the city Poet Laureate Kim Dower in collaboration with the West Hollywood community. The poem’s lines evoke West Hollywood’s landscape, landmarks, people and joie de vivre, in an homage to Walt Whitman’s classic epic poem “I Sing the Body Electric.”

The artwork brings the poem to life, through a digital rendering, traversing from day into night and from the streetscape to the rooftops of the city.

“This poem really spoke to me visually and inspired me creatively. West Hollywood city Poet Laureate Kim Dower, in collaboration with the community, brought up so many themes that run throughout the fabric of West Hollywood; all of which makes this city one-of-a-kind,” Andrisani said. “There is a line in the poem: ‘My city with a small town feel,’ that sums up not only my feelings, but the community of WeHo.”

Enjoy an afternoon of art and fun in Barnsdall Park