The National Student Walkout on April 20 encouraged many students to leave their classrooms to protest gun violence, but Immaculate Heart High School and Middle School observed the 19th anniversary of the Columbine shooting by focusing on civic engagement. 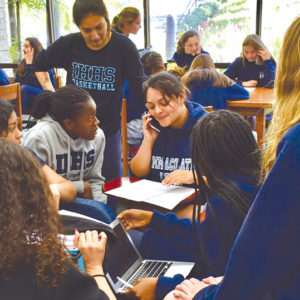 A group of friends supported sophomore Marigrace Carrasco as she made a call to her representative’s local office. (photo courtesy of Callie Webb)

Each year, students and faculty at Columbine High School hold a day of service to honor the lives of 12 students and one teacher lost in the 1999 tragedy. Immaculate Heart students chose to respect that tradition by organizing activities to promote political involvement.

“While many students across the country were walking out, we also wanted to take part in the action in a more targeted and direct way,” Immaculate Heart Student Body President Mia Speier, a senior, said.

Each activity showed students how to make their voices heard. In groups, students drafted statements and then called their representatives about issues important to them, including gun control. Student leaders also directed group discussions on current events, including how students could take action both politically and personally to make a difference in their community.

“I really enjoyed the discussion portion, as it allowed us to share our opinions on a wide range of things in small groups,” sophomore Cordelia Edwards said.

Students learned about the voting process as well, including how to register, how to find out about upcoming elections and how to vote. Students 16 and older even pre-registered or registered to vote.

For senior Natalie George, the event gave her a new appreciation for her own ability to engage in the political process.

“It was great to be able to learn ways in which we could be active in government,” she said. “Kids are often silenced when it comes to these issues we’re regarded as immature, or uninformed. But this event showed that we can be informed and involved, and it’s the power of our voices that will truly make a difference in our country.”