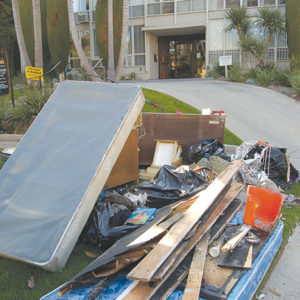 Mattresses and children’s books were among the debris discarded from an apartment building in the 800 block of South Windsor Boulevard, where a fire erupted on April 7 in a two-story, garden-style unit.

Los Angeles Fire Department spokeswoman Amy Bastman said the fire was reported at approximately 4:42 p.m. Firefighters arrived to find a blaze inside a rear, ground-floor bedroom of one unit. The flames were extinguished in just under 10 minutes.

Bastman said the cause is undetermined, but it is not believed to be intentional. No injuries were reported and no estimate of damage or loss was available.

Man charged for damaging car with child inside