After eight months and a $10 million renovation, Crustacean has returned to Beverly Hills with not one, but two new restaurant spaces. The high-end upstairs section, named Da Lat Rose, will not open its doors until May, but downstairs, Crustacean offers a new menu with innovative Euro-Vietnamese fusion delights prepared by chef-owner Helene An and executive chef Tony Nguyen. 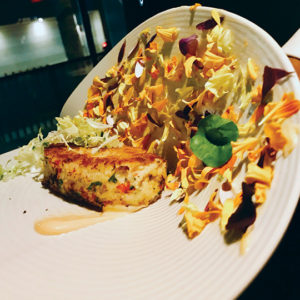 The “crabcake” at Beverly Hills’ Crustacean features a bent plate decorated with nasturtium flowers and a vegan patty made of hearts of palm. Spicy aioli adds a kick to this beautiful dish. (photo by Jill Weinlein)

An is a true American success story. One of 17 children, she was raised in the northern region of Vietnam, but was forced to flee the country by boat during the fall of Saigon. In 1971, her mother-in-law bought a 20-seat restaurant in San Francisco. She and her family arrived in San Francisco and transformed the space into Thanh Long, which quickly amassed a huge following. Since her success in that restaurant, An has taken her ability to seamlessly fuse cuisines to Santa Monica, Orange County and of course, Beverly Hills.

Crustacean beverage director Peter Barriga’s bar program mirrors An’s cooking philosophy and adds Asian spices and flavors for a twist on classic cocktails. The mule is served in a tall glass with turmeric-infused gin, turmeric syrup, ginger syrup, citrus and soda water. With a long ribbon of cucumber for garnish, the drink is visually stunning. There’s also the coconut-enhanced margarita, which I ordered, topped with a wonderful mix of orange, lemon and lime slices.

We began the meal with a unique drink and food pairing. Our server first made us a high-tea cocktail using black tea-infused Chivas Scotch blend, ginger and honey syrup, and then brought out a cigar box. Since I’m not a cigar smoker, I was a bit perplexed – until the server lifted the lid and a pleasing smoky vapor revealed three perfectly shaped cigars filled with tuna, instead of tobacco. The crispy outside of this spring roll was made with feuille de brick, a non-buttery French dough. To add to the whimsy of the dish, each roll had tobiko caviar, or flying fish eggs, at one end, giving the appearance of a lit cigar. 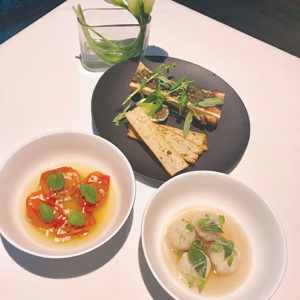 Other dazzling presentations included the surf and turf sashimi with thin slices of wild salmon and wagyu beef. Crispy garlic, purple potato and a splash of tobacco chili vinaigrette topped off the flavorful dish. Another plate featured tuna and bread looking like bite-size pillows and included a dollop of citrusy yuzu crème fraîche on the side. The karate salad arrived with a mound of shredded kohlrabi, offering a taste and texture similar to cabbage and broccoli stems. Earthy black truffle, crispy Kennebec potato and garlic blossom enhanced the vegetable.

The winner for best presentation, however, went to the vegan-style crabcake. The white dish that the crabcake was served on was shaped almost like a taco shell, with one half of the plate bent slightly upright. This raised side was decorated with chopped yellow, orange and purple nasturtium flowers. The pan-fried cake sat on the flat part of the plate, and tasted just like crab, even though it is made with hearts of palm and a swirl of spicy aioli. It was creative – and delicious.

Another elegant dish was the roasted bone marrow with Burgundy escargot and peppered lime. It was served with sprigs of rau ram, also known as Vietnamese coriander, for an added fresh flavor.

Other dishes we sampled included the all-natural rib-eye cooked on a large Himalayan salt block. The steak paired nicely with a glass of Kaiken malbec. Steaming plates of An’s garlic noodles and garlic-roasted Dungeness crab arrived after the beef, offering perfectly succulent crabmeat.

From the spring rolls, to the dumplings, to the crabcake, the delicious and creative menu at Crustacean proves that every month of the restaurant’s nearly yearlong closure was definitely worth the wait.