Los Angeles Fire Department crews contained a brush fire that erupted on April 13 in Griffith Park in the hills above Hollywood to a quarter-acre and prevented the flames from damaging structures. 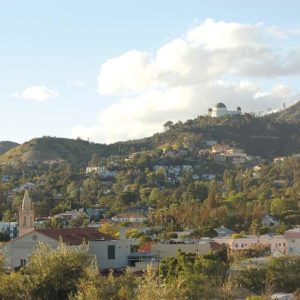 People at the Griffith Observatory sheltered in place during the brush fire on April 13. The blaze was extinguished without causing any damage to structures or injuries. (photo by Edwin Folven)

The fire was reported at approximately 11:20 a.m. in moderately heavy brush on a hillside near the Griffith Observatory. People at the observatory were told to shelter in place and an evacuation was not necessary.

LAFD spokeswoman Margaret Stewart said wind did not present a challenge in fighting the fire. No injuries were reported and the cause remains under investigation.

Firefighters extinguished the blaze in approximately 45 minutes but remained at the scene to encircle the area with a “scratch line,” enabling them to address any embers or small areas still burning. The fire illustrates the danger firefighters face with brush-covered hillsides.

“Our fire season is year-round,” Stewart said, adding that the department asks that people remain vigilant about preventing brush fires.

Stewart said the department requests that people be careful when using equipment that can generate sparks. Motorists are also cautioned to prevent anything dangling from vehicles and are warned to follow all city laws in Griffith Park, including refraining from smoking and using open flames.