The Beverly Hills Bar Association and BHBA Barristers celebrate the 25th anniversary of the Roxbury Park Pro Bono Legal Clinic, the longest running and most successful community outreach program in the organization’s history, with a special reception on Wednesday, April 18, 6 p.m., at U.S. Bank in Beverly Hills, which is presenting and underwriting the event. 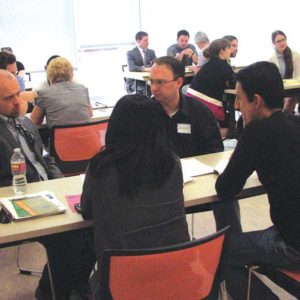 The Roxbury Park Pro Bono Legal Clinic has served thousands of people over the past quarter century with licensed attorneys from the BHBA Barristers volunteering to provide free one-on-one legal consultations, particularly to those who may not be able to afford an attorney or know where to turn for legal help, to answer questions about such topics as landlord-tenant issues; wills, trusts and estate planning; administrative and small claims matters; business disagreements; and other subjects.

Held the first Saturday of the month, the clinic, which has earned an excellent reputation in the community, also provides other legal resources as needed to assist people with their legal matters. Proceeds from the event benefit the Beverly Hills Bar Foundation, which supports the Roxbury Park Pro Bono Legal Clinic and other community programs.

The Roxbury Legal Clinic was launched in 1993 by Christopher Bradford and Richard D. Kaplan, both of whom went on to serve as presidents of the BHBA Barristers and, subsequently, the Beverly Hills Bar Association. The Barristers is the BHBA division that serves lawyers under 37 years of age or who have been practicing less than 10 years. The current Roxbury Park Legal Clinic Chair is Jonah Grossbardt.

“Access to legal services is a challenge for many, and the Barristers have always been ready and willing to help underserved groups in our community,” Bradford said. “In 1993, when I was vice president of the Barristers, we sought to establish a regularly scheduled legal clinic that could be staffed by Barristers.  After learning that there was a large community of seniors who met regularly at Roxbury Park, we explored with the Beverly Hills Recreation and Parks Department the idea of presenting a legal aid clinic there.  The response was overwhelmingly positive, so we got to work signing up Barristers to staff the new Roxbury Park Pro Bono Legal Clinic.”

Upcoming sessions will be held on Saturday, May 5, and June 2 at Roxbury Park, 471 S. Roxbury Drive (at Olympic Boulevard and Roxbury Drive) in Beverly Hills.

Tickets to the 25th anniversary celebration of the Roxbury Park Pro Bono Legal Clinic are $25 per person.

For tickets and information, visit bhba.org.