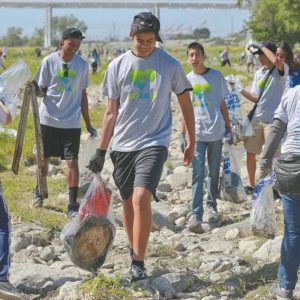 Volunteers will remove trash throughout the entire length of the Los Angeles River during the annual cleanup. (photo by Tom Underhill)

FoLAR’s annual cleanup – the largest urban river cleanup in America – has broken records for volunteer turnout and trash collected. The 2017 project included over 10,000 volunteers who removed more than 100 tons of trash from the Los Angeles River at more than a dozen sites.

The 2018 cleanup will be held at nine sites along the entire length of the river on Saturdays, April 14, 21 and 28 from 9 a.m. to noon. The cleanup begins on April 14 along the upper portion of the river near the Sepulveda Basin, Balboa Sports Complex and Glendale Narrows Riverwalk. On April 21, the cleanup will be held near Los Feliz Boulevard at Bond Park, Fletcher Drive/Bowtie Parcel, Marsh Park and The Frog Spot. Volunteers will work around the lower river on April 28 near Compton Creek and the Del Amo Metro Station, Golden Shore Marine Reserve and Willow Street Estuary.

“L.A. River’s importance to multiple communities along the river stretching from San Fernando Valley to Long Beach, and including residents, businesses and homeless populations is becoming center stage for how L.A. shapes its future,” said FoLAR Executive Director Marissa Christiansen. “The L.A. River is unique in that it serves as a throughline and connecting point unifying many communities in L.A. for love of our urban river. It addresses issues from business to the environment to social justice. But the common thread, as our founder Lewis MacAdams understood early on, is everyone’s passion for this unique connection to nature and each other.”

FoLAR is working with the Los Angeles Homeless Service Authority, whose representatives will work with staff, site captains and volunteers on best practices to follow when encountering people experiencing homelessness in the river channel. LAHSA outreach specialists – who regularly work with individuals experiencing homelessness in the riverbed – will be on site to provide services and to help volunteers identify the difference between trash and personal belongings.

“LAHSA and FoLAR’s joint efforts are to ensure both a safe, enjoyable experience for volunteers and that the homeless population in the riverbed is treated with respect and dignity,” said Nathaniel VerGow, director of access and engagement for LAHSA.