Back in 2006, the closure of Tower Records stores sent music fans across the globe into mourning. And now, 12 years later, those same fans find themselves in mourning yet again. On March 4, the founder of the records store chain, Russ Solomon, died of an apparent heart attack. He was 92.

Solomon created the famed business chain that, at its height, had stores in West Hollywood, Manila, Toronto, Mexico City, London, Buenos Aires, Tokyo and more, each filled with aisles of records, thousands of bands in every genre. Tower’s beginnings, however, were much smaller. Solomon, at just 16 years old in 1941, began selling used records in a corner of his father’s drug store in the Tower Theater building in Sacramento. 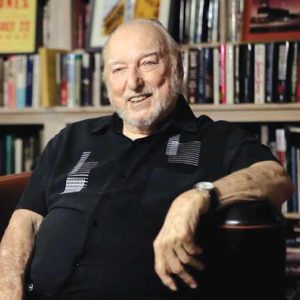 Years later, in 1960, that side business became Solomon’s main business. By 1965, he had moved out of his father’s shop to a building across the street.

From there, the hits kept on coming. After opening another location in San Francisco in 1968, Solomon saw Tower Records take root in cities across the country. But it was perhaps the iconic store in West Hollywood that proved the most famous of them all. Situated on the Sunset Strip in an unassuming one-story building with the classic red and yellow signage, the record store became the go-to spot for music lovers and musicians alike.

As West Hollywood resident Alison Martino recalled in a post for her website Vintage Los Angeles, the Sunset Boulevard Tower Records not only drew in gaggles of eager teenagers, but also certified stars.

In Colin Hanks’ 2015 documentary on the record chain, “All Things Must Pass,” Bruce Springsteen declared, “If you came into town, you went to Tower Records.”

“It was an absolute ritual to go into Tower Records, and just sit in the aisles, read the lyrics, look at the album artwork,” he said.

For Duran, the community that Tower Records formed wouldn’t have been possible without Solomon. The company leader, an eclectic figure, shirked formalities. He was known for his necktie collection, all confiscated from employees, sales people and even customers.

“This is California. You can’t dress like that here,” he told the Los Angeles Times in 1980.

But Solomon was also eager to build a passion for music in others – he let Tower employees choose what to stock, giving each store its own distinct style that varied from city to city.

“I’m grateful he had the vision and foresight to create such a place. It complemented the entire scene of the Strip,” Duran said. “Who else could have turned a simple record store into such a symbol of rock ‘n’ roll and the Sunset Strip?”

Throughout the 1970s, ‘80s and ‘90s, Tower Records continued to expand and surge in popularity. The chain even reached $1 billion sales in 1999. But with the advent of the internet, online music stores like iTunes and file-sharing sites like Napster, Tower’s extending global reach quickly crumbled. In 2006, the chain declared bankruptcy and the businesses shuttered.

“It’s sad. It’s the passing of an era,” Duran explained. “He’s one of the iconic figures.”

Martino, who spent many days and nights in the Sunset Boulevard store, emphasized that Solomon’s legacy went beyond California, calling him a “worldwide innovator.”

“You see, Tower Records was so much more than a record store, it was a musical rite of passage,” she said. “Tower Records said it best: ‘No Music, No Life!’”

According to the Sacramento Bee, Solomon died Sunday night as he watched the Academy Awards with his family.

“Ironically, he was giving his opinion of what someone was wearing that he thought was ugly, then asked (his wife) Patti to refill his whiskey,” his son Michael Solomon told the Bee. By the time she returned with his drink, he had died.

Solomon is survived by his wife, Patti Drosins, and his two sons from his first marriage, Michael and David.

Life in the slow lane along L.A. streets