The Getty takes visitors ‘Beyond the Nile’

In a new exhibition, the J. Paul Getty Museum examines the cultural and artistic connections between Greece, Rome and the most ancient of the Mediterranean civilizations, Egypt. 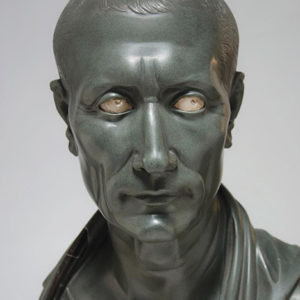 The Getty’s new exhibition will explore developments in private and royal portraiture, including portraits of Cleopatra, Julius Caesar (above) and Marc Antony. (photo courtesy of the Getty Center)

On view at the Getty Center from March 27 through September 2018, “Beyond the Nile: Egypt and the Classical World” will include nearly 200 rare objects, many of them on view in the U.S. for the first time.

“‘Beyond the Nile’ is the first exhibition to provide a comprehensive overview – spanning more than two thousand years – of Egypt’s interactions with the classical world. It is an unprecedented compilation of works of art from the Bronze Age to the late Roman Empire, drawn from the major museums of Europe and America, as well as the Getty’s own collection,” said Timothy Potts, director of the Getty Museum and one of the curators of the exhibition.

Exploring the artistic interplay between these cultures from the Bronze Age to Roman times, the exhibition includes nearly 200 objects, including royal Egyptian stone vessels sent to Minoan Crete and Mycenaean Greece, archaic Greek pottery and sculpture inspired by Egyptian models, portraits in Egyptian and Greek style created during Greek rule in Egypt, and remarkable religious images and luxury goods with Egyptian themes made for Roman patrons in Italy.

As part of the show, a towering granite obelisk in the museum entrance hall will greet visitors. This obelisk, carved in 88-89 A.D. and dedicated, according to its hieroglyphic inscription, to the goddess Isis and the emperor Domitian, is more than 15 feet tall. It comes to the Getty from the Museo del Sannio in Benevento, Italy, and, like many objects in the exhibition, is a Roman work inspired by Egyptian art.