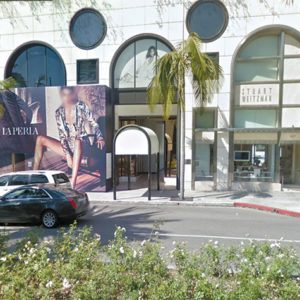 Three suspects were arrested after a burglary and robbery at Alitsiya Design in Beverly Hills. (photo courtesy of Google Maps)

At approximately 11:40 p.m., a security guard reported a commercial burglary in progress at Alitsiya Design. The guard confronted the three suspects, who allegedly smashed a glass door to gain entry while the store was closed. One of the suspects assaulted the security guard as he attempted to detain them. The three suspects then got into a vehicle and drove away.

Beverly Hills Police Department officers searched the surrounding area and located the suspects’ car near Wilshire Boulevard and Veteran Avenue. They attempted to pull the suspects over, but a pursuit ensued.

Officers followed the vehicle to Manhattan Beach Boulevard and Cranbrook Avenue in the city of Lawndale. The driver abruptly stopped, exited the vehicle and fled on foot. He was apprehended after a short foot pursuit. The other two occupants were apprehended inside the vehicle. Numerous pieces of stolen jewelry were recovered during the investigation.

Markess Damond Coleman, 20, of Los Angeles, was arrested for robbery and commercial burglary. He is on post-release community supervision for assault.

Jamel Kenneth Walker, 20, of Cypress, was arrested for robbery and commercial burglary. Walker is on summary probation for possession of burglary tools.

Clayton and Coleman are being held without bail. Walker is being held on $100,000 bail.