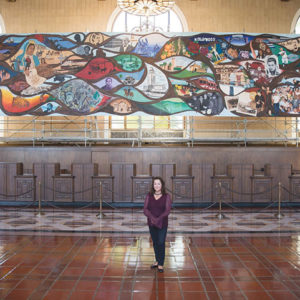 This is the first time the full length of the mural, which portrays the city’s history through a series of vignettes woven into the flowing hair of la reina de Los Ángeles (the queen of Los Angeles), will be shown inside a museum setting, presented across three walls of an intimate gallery to bring visitors eye-level with the 80-foot panoramic work. The rarely exhibited mural was most recently on view last fall at Union Station in downtown Los Angeles as part of the Getty-led initiative Pacific Standard Time: LA/LA.

The installation will include a digital touchscreen offering visitors the opportunity to explore the vignettes depicted in the mural, as well as historical reference material used by the artist and behind-the-scenes looks at the making of the mural. All of the exhibition’s content is bilingual, in English and Spanish.

“Barbara Carrasco’s ‘L.A. History: A Mexican Perspective’ provides a powerful opportunity to engage museum visitors with the nature and culture of Los Angeles,” said Dr. Lori Bettison-Varga, president and director of NHMLA. “We are honored to share this moving work, which complements so perfectly our ‘Becoming Los Angeles’ exhibition in highlighting moments of cultural contact, struggle, innovation and the changing landscape of the city over time.”

“Sin Censura: A Mural Remembers L.A.” was developed by NHMLA’s exhibitions team and Dr. William Estrada, NHMLA’S history department chair, with Barbara Carrasco, who is loaning the mural to the museum for the exhibition. The exhibition title references the mural’s censorship by the former Los Angeles Community Redevelopment Agency, who originally commissioned Carrasco to create the mural for the city’s 1981 bicentennial, but halted the project when the artist refused to remove 14 depictions of historical moments the agency deemed too controversial.

NHMLA is located at 900 Exposition Blvd. For information, visit nhm.org.