A residence at 1607 S. Ogden Drive recently renovated by Randy Esada, of Prospr Co. on Beverly Boulevard, will be on open house on Saturday, March 24, from 2 to 4 p.m. Esada and his husband David Wilcox purchased the 1930s house in the Picfair Village community last fall and embarked on an extensive restoration project that included installing new copper pipes, as well as electrical and heating/air conditioning systems. 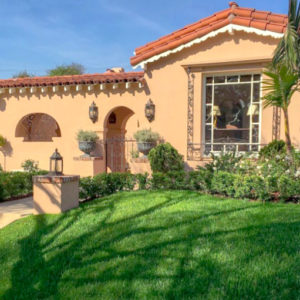 A home at 1607 S. Ogden Drive has been meticulously renovated. (photo courtesy of David Wilcox)

Many of the original characteristics are intact and have been refreshed. The house includes coffered and beamed ceilings, original art deco bathroom tile, original wood floors and a courtyard with a fountain. It also features an open kitchen floorplan with a glass subway tile backsplash, farmhouse sink, Thermador appliances and a large island with quartz countertops. Additionally, a new master suite is nestled toward the back of the home with French doors leading out to a deck.

Esada said Picfair Village, located near Fairfax Avenue and Pico Boulevard, is very popular. An interim control ordinance in the neighborhood prevents developers from buying and tearing down existing homes, which preserves the character of the neighborhood, he added.

“The Picfair neighborhood is very hot right now. It’s close to everything important,” Esada said. “It also has an ICO, which is great. It encourages historically responsible players to come in and renovate these properties.”

Wilcox said nearby Pico Boulevard is part of the city’s Great Streets Initiative, featuring amenities that encourage walking, and new businesses moving in. Esada designed the layout and spaces in the home and provided lighting and designer items from his Beverly Boulevard showroom. For information, visit 1607southogden.com.