With President Donald J. Trump in the neighborhood for a fundraiser, a rally of protesters gathered in Beverly Gardens Park in Beverly Hills for an impromptu night of chanting, speeches and signs opposing the president and his policies on Tuesday night. 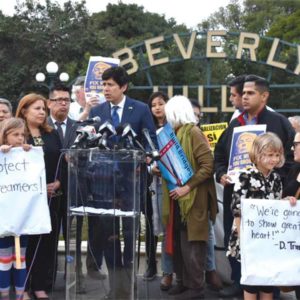 State Sen. Kevin de Leon (D-Los Angeles), who is also challenging U.S. Sen. Dianne Feinstein (D-Calif.) for her seat in this year’s election, held a rally in opposition to the president and his policies on Monday in Beverly Hills. (photo courtesy of Kevin de Leon’s office)

According to media reports, Trump attended an up to $250,000-per-attendee fundraiser at a private home in Beverly Park. Earlier in the day, Trump visited San Diego to view prototypes for the border wall between the U.S. and Mexico that helped propel his campaign among conservative supporters. It is the president’s first visit to Southern California since taking office.

State Sen. Kevin de Leon (D-Los Angeles), who is challenging U.S. Sen. Dianne Feinstein for her seat in this year’s election, joined anti-Trump protesters the night before in Beverly Hills.

“We gathered civil rights and labor leaders to protest the president’s politics of discrimination and bigotry,” de Leon said on Twitter.

Other protests emerged in multiple locations on Tuesday, including at the Intercontinental Hotel in downtown Los Angeles, where Trump was reportedly spending the night.

Later on Tuesday night in Beverly Hills, after the anti-Trump protesters cleared the park in front of the famed yellow Beverly Hills sign, a small group of the president’s supporters manned the intersection of Santa Monica Boulevard and Beverly Drive, holding signs as cars drove past. One of the signs read Trump/Pence 2020.

In a news release following the president’s border wall briefing, the Department of Homeland Security said the border wall would be combined with mission-ready agents, patrol roads, sensor technology and support resources.

“But importantly it also includes the ability to promptly remove illegal aliens, terrorists and criminals, closing often exploited loopholes in our immigration system,” DHS Secretary Kirstjen M. Nielsen said. “After speaking with our frontline operators at the border today, their message underscores the urgency for Congress to take action and find legislative solutions to secure our border and make America safe. I want to thank President Trump for his steadfast support for the men and women of DHS and what they need to execute their mission.”

The president and elected officials throughout California have verbally sparred over the state’s immigration policies, and its sanctuary state status.

“California’s sanctuary policies are illegal and unconstitutional and put the safety and security of our entire nation at risk,” Trump tweeted on the morning he arrived.

In an open letter, Gov. Jerry Brown responded by recalling a visit George W. Bush made to California when he was president, when he said “California has been the place where the future happens first.”

“Our prosperity is not built on isolation,” Brown wrote. “Quite the opposite. California thrives because we welcome immigrants and innovators from across the globe.”