Mia Freeman, a junior at Marjory Stoneman Douglas High School in Florida, thought the alarms blaring on Feb. 14 as the school day was winding down were for a fire drill.

“None of us knew that our friends, classmates and teachers were getting shot,” she said, speaking in front of students at Shalhevet High School in the Fairfax District on March 23. 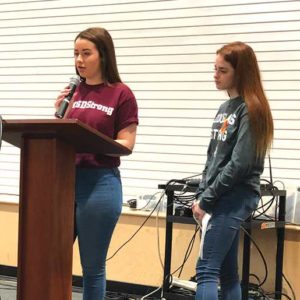 Mia Freeman (left) and Hayley Licata, juniors at Marjory Stoneman Douglas High School in Florida, traveled to L.A. to speak to students at Shalhevet and participate in the March for Our Lives in downtown. (photo by Luke Harold)

Freeman and one of her classmates also attended downtown L.A.’s March for Our Lives rally last Saturday to call for more progress against gun violence, especially in schools. Other students from Parkland, Florida, helped lead the march in Washington, D.C., one of the many sister marches held around the world last weekend.

Last month, after she heard the screams of classmates warning that an active shooter was roaming the school, Freeman evacuated with some other students. Her father told her on the phone to run to a nearby Starbucks, where she began following the news coverage.

“How could this be happening to us?” Freeman said, recalling her thoughts at the time. “You see these things on the news and hear about them, and you feel sad, but you never actually think it will happen to you.”

She texted her friends to see if they were safe. By the next day, the community in Parkland learned that 17 people were killed and 14 more were injured by the gunman, a 19-year-old former student who had been expelled.

“No one should ever have to experience this pain,” Freeman said. “The pain of going to 17 funerals of students and teachers at your own school, the pain of seeing an empty desk that’s supposed to be filled, the pain of no longer having a student-teacher, the pain of not knowing if you’re ever going to see your friends or family ever again.”

The students in Parkland have been credited with keeping the public discourse about gun violence and school safety alive longer than it has lasted after similar tragedies in the past.

“When you see something horrible happen on the news, you … feel bad for the people, then you move on and go about your lives,” said Hayley Licata, a junior at Marjory Stoneman Douglas. “When it happens in your own backyard, moving on, or even being able to process what happened, feels almost impossible.”

Licata made it home shortly after the alarm went off on the day of the shooting, but many of her classmates were on lockdown at campus.

“I wanted to go help, but there was nothing for me to do,” she said. “I had a lot of mixed emotions. I was scared, I was happy I was home safe and I felt guilty I was home safe while my friends were locked in closets.

“By the next day, we had the names of all 17 victims, names we will forever remember. Some I knew, and others I didn’t know at all. At that moment, none of it mattered. They were all part of our school and they were all taken away from us.”

Sophie Handelman, a freshman at Shalhevet, said via email that it was “so much more than inspiring” to hear the students’ account and call for action.

Nick Melvoin, vice president of the LAUSD Board of Education, compared the student activism over gun violence to the 1968 Chicano walkout, when the district’s students protested educational equality. He also mentioned student-led protests over the Vietnam War.

Earlier this month, students throughout Los Angeles County joined a national 17-minute walkout one morning to honor the 17 victims from Parkland.

“I am inspired, not just by the students in Parkland, but by students across the country,” Melvoin told the students at Shalhevet. “Adults have failed you on this issue. Adults have abdicated their responsibility to keep kids safe.”

The LAUSD school board approved a resolution by Melvoin to support stricter state and federal gun control, and to form a task force for improving school safety.

“Our future is bright and our students are going to lead us to a better path,” Melvoin said.

Poetry in motion in West Hollywood