‘Pacific Rim: Uprising’ insults the memory of a once fun film series

Humanity once again defends itself against giant monsters with its own giant monsters. The premise is familiar for most anime lovers who enjoy a good bout between kaiju, Godzilla-sized creatures hell-bent on keeping city construction crews employed indefinitely, and jaegers, human-run robots of equal size that also have trouble keeping skyscrapers erect during showdowns. 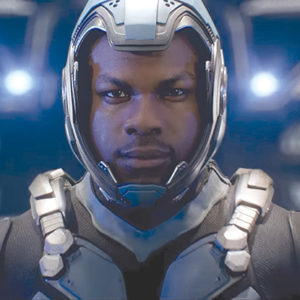 But a lot has changed since the 2013 fan favorite “Pacific Rim.” Star Charlie Hunnam is out, replaced by John Boyega, flaunting his “Star Wars” clout, who leads a cast of mostly new faces. But the old ones suffer the most in this new “Uprising.”

When “Pacific Rim” premiered, it was praised for being the right kind of popcorn fun, even featuring a diverse cast unlike other big-budget films. One problem: it only included one prominent female character, which lead to a slew of criticism for failing the Bechdel Test, which asks, does the film feature more than one female character, and if so, do they talk to each other about something other than men? Not “Pacific Rim,” but to its credit, that one character was incredibly well-portrayed.

The film created such a rounded arc for her that a new Bechdel Test was created based on the character’s name: the Mako Mori Test, which asks whether a female character has a fully-realized arc that doesn’t merely support a male character.

Sure, “Pacific Rim: Uprising” features more female characters, easily passing the Bechdel Test. We meet co-lead and cadet Amara (Cailee Spaeny) and her training rival Viktoria (Ivanna Sakhno), who on two occasions argues about the importance of “bigger is better.” Then there’s soldier Jules (Adria Arjona), mostly a love interest for two male characters, and tech businesswoman Lewin Shao (Tian Jing), whose drones are about to make the jaeger program obsolete. Another problem: most of them don’t pass the test the previous film established.

I suppose young Amara meets the bare minimum, in some ways by having the same backstory as Mako (Rinko Kikuchi), but you know who doesn’t pass the test? Mako. She’s a supporting character, briefly in the story to motivate young Jake Pentecost (Boyega), son of deceased war hero Stacker Pentecost (played by Idris Elba) and Mako’s brother through adoption after her family died in a kaiju attack. Mako’s diminished role is particularly frustrating since she likely wouldn’t be in this position if Hunnam’s Raleigh Becket returned for the sequel.

In the prior film, they co-pilot iconic jaeger Gypsy Danger together, saving the world as a team. His exodus should’ve made room for Kikuchi’s Mako to take the lead, let Jake and Mako save the day in the newest model, Gypsy Avenger. Instead, director-writer Steven S. DeKnight and three other screenwriters decide to burn it all down and start fresh with an uneven group of trainees and the dullest bromance between Pentecost and Nate Lambert (Scott Eastwood), who has the character depth of vanilla ice cream.

It’s hard not to read something more sinister into what occurs in “Uprising.” While Hunnam jumped jaeger, the scientist duo Herman (Burn Gorman of “Torchwood”) and Newton (Charlie Day) – another character betrayed in different ways – provide the most consistent connection to the original film. Both actors in their 40s, they’re the old dogs. Next in line is Kikuchi, who’s now in her mid-30s. For Hollywood, that’s well past a woman’s prime on screen. And why bother expanding this Japanese character’s story when Chinese star Jing, as Liwen Shao, is seven years younger and can help appease the Chinese box office, which is a primary reason this sequel even happened.

The idea that two Asian actresses could enjoy leading roles – or Godzilla forbid, actually talk to each other, which is another variant of the Bechdel Test regarding how little actors of color converse – is apparently absurd for this filmmaking team. And who needs a nonwhite woman in her 30s leading the show when an upcomer like 20-year-old Spaeny can step up and keep this franchise going for years before her first gray hair has to be plucked.

So Hunnam leaves, making room for Boyega, a far better actor and more commanding presence. One step forward for the sequel. But this choice doesn’t excuse all the terrible, miserable events that transpire. By itself, it’s not unwatchable. Some of the action choreography is actually enjoyable. But it’s soulless, ripping out the care and detail of the first film.

So many trolls bemoaned what “The Last Jedi” did to their precious memories of “Star Wars” – unfounded complaints based more on audience expectation than anything truly rational. Little did we know Warner Bros. had a team in hiding, ready to snuff out the light of a once promising film property, replacing good characters with young ones for the sake of sequels. What an insult to a legacy.

Body that was found adds to furor over encampment

Perhaps, just perhaps movies are about havings some fun instead of repeating wet dreams of the SJWs.