New ‘mob’ of meerkats debuts at the L.A. Zoo

The Los Angeles Zoo has welcomed a new breeding group of meerkats that can be viewed in their habitat bonding with each other, establishing a community structure and digging an intricate maze of holes and tunnels. 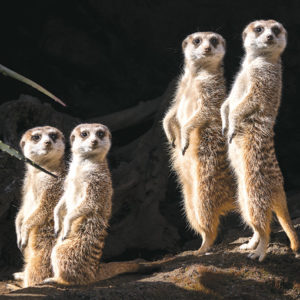 The new meerkats are from zoos in Quebec, Canada and Wichita, Kansas, and were brought to Los Angeles to replace meerkats at the Los Angeles Zoo that died of old age. (photo by Jamie Pham)

Four 2 to 3-year-old male meerkats arrived from Zoo de Granby in Granby, Quebec in September 2017, while three 6-year-old females came from the Sedgwick County Zoo in Wichita, Kansas in January 2018. The group came through a recommendation from the Association of Zoos and Aquarium’s Species Survival Plan program after the zoo’s elderly meerkats died.

The two groups were slowly introduced to each other at the zoo’s quarantine facility before entering their outdoor habitat on Feb. 23. Animal care staff prepped the exhibit by collapsing old tunnels and filling holes so the new meerkats could work together and build trust while digging a new home. So far, the group is getting along well, and the zoo hopes that meerkat pups will be on the horizon.

“I’ve been working with meerkats for many years, but this would be my first time with a mob that could potentially raise pups,” said Rose Legato, senior animal keeper at the L.A. Zoo. “My staff and I are excited to learn more about this new group, and more importantly, share the journey with our zoo patrons.”

The pint-sized members of the mongoose family are native to the deserts and grasslands of the southern tip of Africa. They have long been a favorite among zoo guests because they have expressive personalities, and constantly dig and sunbathe.

Many people may not realize that meerkats are hyper-aware of their surroundings and communicate within their group. Since meerkats are prey for predators on land and in the air, they are constantly working together to look out for animals such as eagles, hawks and jackals. The group creates an intricate system of burrows to keep them safe from predators. They also assign a guard to watch over the community and alert others of a potential threat using a bark or high-pitched squeal.