As women each day overcome gripping struggles and create powerful stories of success, nine Russian women will be in the spotlight as the seventh annual Miss Russian LA 2018 Competition returns to Hollywood on Friday, March 30, at the Taglyan Cultural Complex. 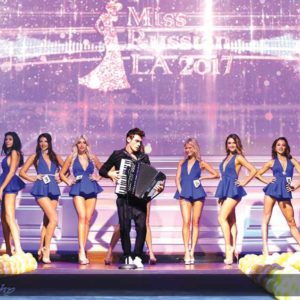 Peter Dranga, a Russian accordionist who has revitalized the popularity of the accordion by developing a unique pop style, performed at last year’s event. (photo courtesy of Ms. Russian LA)

The event will showcase the strength, intelligence, beauty and talent of the finalists representing their Russian roots as they compete to bring home the crown. At the conclusion of the competition, one woman will win the coveted Miss Russian LA 2018 title.

“I am proud to be able to showcase the talent and beauty of my beloved homeland,” said Lika Osipova, producer and director of Miss Russian LA 2018. “Even with all the turbulence surrounding Russia, we have had an incredible amount of support and enthusiasm for this pageant in the Los Angeles community.  My goal is to provide an entertainment-filled evening as well as a challenging competition.”

Celebrity judges will include: Cathleen Young (TV writer/producer), Evgeny Afneevsky (Oscar and Emmy-nominated director/producer of the documentary “Winter on Fire”); and Gleb Savchenko (professional dancer/choreographer currently on “Dancing with the Stars”).

The pageant is open to any qualified female at least 18 years old who is a California resident with the ability to speak Russian. The final nine contestants were selected from over 50 applicants who will be judged in five separate categories: presentation, talent, interview, bikini and evening gown. Both English and Russian will be spoken throughout the pageant.

This year, the pageant winner will receive the title of Miss Russian LA 2018 and an award package valued at over $20,000 including a bejeweled crown, appearance on the front cover of Fact Magazine, and a five-day trip for two.

Anna Petrova is the reigning queen. She served as an ambassador this past year representing the Los Angeles-based Russian community at numerous public speaking engagements, fundraisers, and civic events. There are an estimated 600,000 Russian-speaking people in Southern California.

The Taglyan Cultural Complex is located at 1201 Vine Street in Hollywood. For information, visit eventcartel.com.

DUI checkpoint to be held in WeHo