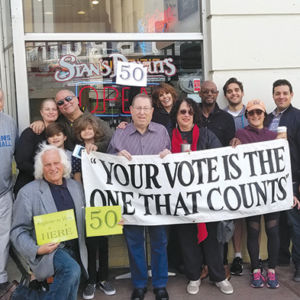 Levin, a graduate of Wilshire Crest Elementary and John Burroughs Middle School, helped coordinate a statewide effort to register voters in 1971 after the 26th Amendment lowered the voting age to 18. Levin recruited his mother Sylvia, who died in 2009, to help during the summer of 1973, and she never stopped. They registered voters at locations throughout Los Angeles including Canter’s Deli, the former Century City Shopping Center, Westwood Village Post Office, Malibu Post Office, Abbott Kinney Boulevard in Venice and more. Over 36 years, more than 47,000 voters were registered – the most by any individual in Los Angeles County and California. Koretz and Levin were joined by volunteers who helped over the years including actor John Kapelos; Stan Berman, who opened Stan’s Donuts in 1963; former Los Angeles Controller Rick Tuttle and members of Koretz’ staff.

“Councilmember Koretz has been a supporter of this project for decades,” added Levin, who encouraged people who haven’t registered to vote to do so. Members of the public can register by visiting lavote.net and sos.ca.gov.