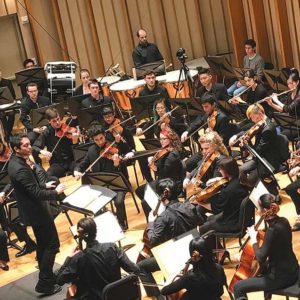 Riccardo Minasi, who will appear as a guest conductor at the Los Angeles Chamber Orchestra, is one of the top musical talents from Europe. (photo by Harrison Parrott)

Minasi, a violinist and conductor, has quickly established a reputation as one of the most exciting talents on the European scene in recent years. Co-founder of the ensemble il Pomo d’oro and director from 2012 to 2015, he has been the chief conductor of the Mozarteumorchester in Salzburg since 2017 and artist-in-residence of the Resonanz Ensemble at the Elbphilharmonie in Hamburg.

Sutphen, a recent graduate of the Juilliard School, has already appeared with Opera Theatre of Saint Louis, Milwaukee Symphony and Opera Studio at Oper Frankfurt, among others.  Sutphen’s numerous awards include The George London Foundation Encouragement Award and The Novick Career Grant from The Juilliard School, as well as being named a finalist at the Dallas Opera Guild National Vocal Competition and receiving first prize at The National Society of Arts and Letters.

Tickets start at $45. Discounted tickets are available by phone for groups of 12 or more.  College students with valid student ID may purchase tickets for $8, subject to availability.