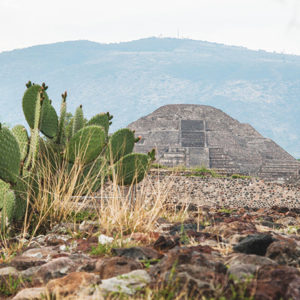 Teotihuacan was an incredibly complex city known for its pyramids and compounds. The image above is a view of the moon pyramid in the Mesoamerican city with the Cerro Gordo mountain in the distance. (photo by Jorge Pérez de Lara Elías, © INAH)

“City and Cosmos” includes nearly 200 works in various media, such as monumental sculpture made of volcanic stones, polychrome mural paintings, and smaller-scale objects made out of precious greenstones, obsidian and ceramic. Organized in collaboration with Mexico’s Instituto Nacional de Antropología e Historia and the de Young Museum of San Francisco, “City and Cosmos” provides an opportunity to see these objects, many of which have never been exhibited in the United States.

“Shaped over centuries by many different peoples and cultures, Teotihuacan was one of the most significant civic centers in the Western Hemisphere,” said Michael Govan, LACMA CEO and Wallis Annenberg director. “Telling its complex and cosmopolitan history is especially relevant to a place like 21st century Los Angeles, where more than 150 languages are spoken.”

The ancient city of Teotihuacan flourished in central Mexico in the first millennium and was the largest urban center in the Americas in its day. Highly organized and densely populated, it was built in a grid-like plan over roughly 8 1⁄2–9 1⁄2 square miles. “City and Cosmos” focuses both on the main pyramids and residential compounds to explore the central question of how the city worked to create a cohesive civic identity.

Prang to attend meet and greet

Celebrate spring in the park