More than 24,000 runners from around the world will pass through the local area on Sunday, March 18 during the 2018 “Skechers Performance Los Angeles Marathon.” 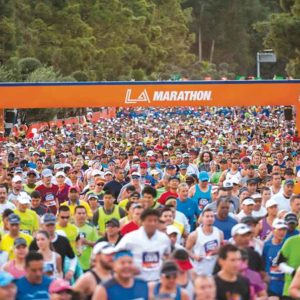 Thousands of runners will take to the streets of Los Angeles during the Skechers Performance Los Angeles Marathon. (photo courtesy of Conqur Endurance Group)

The marathon follows a “stadium to the sea” route that starts at Dodger Stadium and ends at the Santa Monica Pier. Runners will pass landmarks such as the TCL Chinese Theater in Hollywood, the Sunset Strip in West Hollywood and Rodeo Drive in Beverly Hills.

The 33rd annual marathon begins at 6:45 a.m., with the professional female runners leaving first. The professional male runners depart at 6:55 a.m. and the full field starts at 6:55 a.m. Runners first wind through downtown before heading west. They are expected to reach the east Hollywood area at approximately 7:30 a.m. The marathon is expected to conclude near Ocean and California avenues at approximately 11:20 a.m.

A cash prize purse of $100,000 will be offered to the men’s and women’s fields, with $23,000 for first place, $11,250 for second, $9,000 for third, $4,500 for fourth and $2,250 for fifth in each division. The men’s professional field features the last three Los Angeles Marathon winners: defending champion Elisha Barno, the 2016 winner Weldon Kirui and the 2015 winner Daniel Limo, all from Kenya. The women’s professional field is headlined by defending champion Hellen Jepkurgat, of Kenya, who will face Olena Shurkhno, of Ukraine, and Ethiopians Dire Tune and Tsehay Desalegn as top contenders.

Entertainment planned for the 26.2-mile course includes 50 bands and more than 500 cheerleaders at four entertainment centers and more than 50 charity cheer zones. West Hollywood city officials are excited about welcoming the marathon runners, which has become an annual tradition.

“As someone who has run the L.A. Marathon many times, I know first-hand the hard work that goes into preparing for and running in the marathon,” said West Hollywood Mayor John Heilman. “Participating in this athletic adventure has brought marathoners to one of the most inspiring cities in the world. As they hit the halfway point in their 26.2-mile journey, they’ll enter West Hollywood on the Sunset Strip, passing its legendary history-making music venues and conjuring up the playlists that make up our city’s amazing musical history, from Janis Joplin and The Doors in the 1960s to Van Halen and Guns N’ Roses in the 1980s. As they turn onto Santa Monica Boulevard, they will literally be getting their kicks on of our little stretch of Route 66.”

In Beverly Hills, the first runners are expected to arrive as early as 8 a.m. Water stations will be located at Burton Way/Foothill Drive, and on South Santa Monica/Charleville Boulevard. A medical station will be located in the Rexford Mini Park at Rexford Drive and Burton Way.

Because there are multiple municipal jurisdictions involved, extensive coordination is required and numerous roads will be closed along the L.A. Marathon route. Streets will be opened on a rolling basis after the runners pass. For a list of closures, visit lamarathon.com. For specific information about street closures in Beverly Hills, visit beverlyhills.org/marathon.