On the day it was announced that Mayor Eric Garcetti wants to end homelessness in Los Angeles by 2028, residents in the Melrose community gathered for a meeting at Poinsettia Park on March 20 to discuss options for addressing a homeless encampment on Poinsettia Place between Willoughby Avenue and Romaine Street. 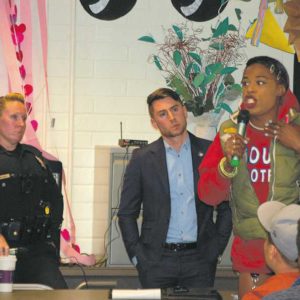 A woman who identified herself as transgender and homeless said while some homeless individuals are involved in crime, many are just struggling to survive. LAPD Senior Lead officer Inga Wecker and Robert Oliver, field deputy for Councilman Paul Koretz, discussed ways the city is trying to protect residents at the meeting. (photo by Edwin Folven)

Many of the 75 people who attended the meeting spoke about their experiences with homeless individuals in the area. Complaints included people breaking into cars and garages, using drugs and soliciting sex, and urinating and defecating in public. While most stressed they are compassionate about the plight of the homeless, they want the city to do more to address the problem.

“I have been here 19 years and I have never seen it this bad,” said a Willoughby Avenue resident who declined to provide her name. “I don’t walk down Poinsettia anymore, I walk through the park because I don’t want to see it. Something needs to be done.”

“I feel like we are at a crisis point here,” said an Alta Vista Boulevard resident who only identified himself as Bradley. “I recognize homelessness is a major problem affecting Los Angeles right now. I don’t think having them in tents is a permanent solution.”

The city routinely removes trash and debris at the site, and cleaned up the area as recently as Monday. But people can’t be forced to move and homeless individuals return, becoming a source of consternation and fear for many neighbors. The city allows people to stay in tents on sidewalks from 9 p.m. to 6 a.m. under a settlement in a lawsuit filed by the ACLU, but they are supposed to take them down during the day. Officers from the Los Angeles Police Department’s Wilshire Division make daily contact with homeless individuals living at the site, said Senior Lead Officer Inga Wecker. If the people comply with the rules on tents and do not have warrants or are breaking laws, there is often little police can do other than try to direct them to services.

“We are working this from several different angles. Being homeless is not a crime,” Wecker said. “But there are some issues when people are living on the streets. Tents can legally be up from 9 p.m. to 6 a.m., but they need to be collapsed during the day. When we go over there … we are asking first that people take the tents down. If they comply, they comply. If they refuse, they eventually get a ticket for that. We do run people for warrants [for criminal offenses]. We have arrested two people from this location for burglary. There are criminals among them, just as there are criminals among the housed as well.”

Wecker said the LAPD addresses homelessness through Operation HOPE (Homeless Outreach and Proactive Engagement), a program in which officers are paired with social service workers and others who can help link homeless individuals with services. Wecker said Operation HOPE is a regional LAPD program in multiple divisions, and the team comes to the Wilshire Division at least once a week. She added that some homeless individuals accept services, but if they don’t want to leave an encampment, they can’t be forced because it’s public property.

Robert Oliver, a field deputy for Councilman Paul Koretz, 5th District, said the city is working on solutions to address homelessness and said he empathizes with the residents. People were encouraged to call 911 if they witness a crime occurring, and to continue reaching out to their neighborhood councils and City Council offices about specific concerns like the encampment.

The sidewalk on which the encampment is located is adjacent to a Los Angeles Department of Water and Power substation, and the city is working with DWP to come up with ways to reduce the number of homeless people living there. While cleanups have occurred and homeless individuals leave, they often return in a matter of days.

“We are all compassionate when it comes to the struggle of those who are homeless, but as council member, my primary concern is for the health and safety of my constituents,” Koretz said in a statement. “The growing encampment near Poinsettia Park has created a troubling and hostile environment for neighbors. I have received numerous reports of transients harassing and intimidating residents, and that is unacceptable. This encampment also presents a serious danger to the LADWP substation on Poinsettia Place, as we have received numerous, confirmed reports of transients making illegal entry into the facility. This issue is among my highest priorities in the district, and I have directed my staff to address it as such. My staff has actively worked with all necessary agencies to resolve the issue as quickly as possible while taking into account our responsibility to care for those in need. We must maintain the safety and quality of life of residents, as well as our city’s critical infrastructure.”

One of the most poignant moments of the meeting came when a woman who identified herself as transgender and homeless entered the room and spoke briefly about the perils of being unsheltered before abruptly leaving.

“I think that people that are in poverty, in real poverty, need to say something. When you don’t have a roof over your head, somewhere to sleep when it’s really, really cold at night and it’s pouring down rain, it’s as close to hell, as no one is thinking about stopping to help you,” she said. “They are not trying to seek justice for people who are living in poverty.”

West Hollywood City Councilwoman Lauren Meister attended the meeting with representatives for the city and the sheriff’s department to listen to concerns, as the encampment is near the city’s border. She said solutions are difficult, but West Hollywood is also committed to addressing homelessness.

Peter Nichols, co-founder of the Melrose Action Neighborhood Watch, which organized the meeting, said he plans to continue pressing city leaders to act. He said another meeting will be held at a date to be determined in April to continue the discussion and developer more strategies.

“I think the consensus was that there is a much broader picture,” Nichols said. “Our number one goal for April is to hold a larger meeting, because we weren’t really able to get a consensus on a plan of action.”

4 a.m. bar bill back in Senate