A German national was sentenced on March 23 to 33 years in state prison for setting a series of fires in Hollywood, West Hollywood and other areas during the New Year’s weekend in 2011-12. 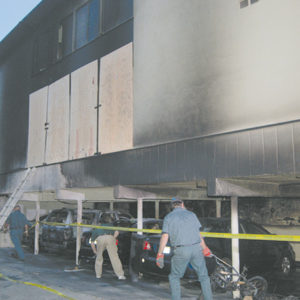 Harry Burkhart struck at numerous locations, including this apartment building in Hollywood. (photo by Edwin Folven)

Los Angeles County Superior Court Judge George Lomeli sentenced Harry Burkhart, 30, who was found guilty in September 2016 of 25 counts of arson of property, 18 counts of arson of an inhabited dwelling and two counts each of possession of an incendiary device, attempted arson and arson of a structure.

Burkhart claimed insanity and a mistrial was declared in the trial of the first sanity phase after the jury deadlocked. A second sanity phase trial was held and a jury found him sane earlier this month.

Burkhart primarily started the fires in carports and subterranean garages at apartment buildings in the Hollywood and West Hollywood areas, but also struck in the San Fernando Valley. The crimes occurred from Dec. 29, 2011, to Jan. 2, 2012, when a reserve deputy from the West Hollywood Sheriff’s Station pulled over and arrested Burkhart near Sunset Boulevard and Fairfax Avenue. He has remained in custody since.

Prosecutors said Burkhart set the fires as retaliation after his mother was arrested in Los Angeles and later deported for alleged crimes in Germany. Burkhart and his mother lived in an apartment on Sunset Boulevard just east of West Hollywood.

The case was investigated by the Los Angeles Fire Department’s Arson and Counterterrorism Section, the Los Angeles Police Department, the Los Angeles County Sheriff’s Department and the Bureau of Alcohol, Tobacco, Firearms and Explosives. LAFD public information officer Capt. Erik Scott recalled that the arson spree was a troubling period for authorities.

“I remember vividly as we worked around the clock during the 2011-2012 holiday season consulting with our dispatch center, mapping 911 calls of fires that torched carports, garages and homes that poured in around the Hollywood area,” Scott said. “As public information officers, we attempted to calm terrorized residents and share with them what various city departments were actively doing to ensure their safety. The fact that no one was injured in these 47 fires is testament to the outstanding job Los Angeles Firefighters performed, rapidly arriving and quickly extinguishing the flames.

“These egregious crimes didn’t just tax firefighting resources, [they] caused millions of dollars in property damage and scarred many people’s lives, some who narrowly escaped their burning home with their life,” Scott added. “This significant sentencing highlights the great work investigators performed and serves as a reminder that anyone committing the act of arson in Los Angeles will be brought to justice.”

The Getty takes visitors ‘Beyond the Nile’