The cause of a fire that damaged a vacant building in east Hollywood on March 11 remains under investigation by the Los Angeles Fire Department. 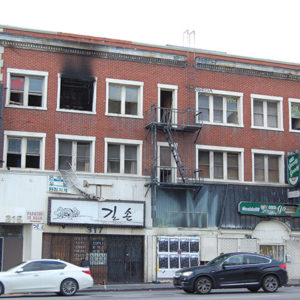 The fire was reported shortly after 2 p.m. in a building at 315 N. Vermont Ave., just north of Beverly Boulevard. LAFD spokeswoman Margaret Stewart said the firefighters who were initially dispatched found flames and smoke coming from the top floor on the east and south sides of the building.

“There was a potential for the fire to spread,” Stewart added. “They saw heavy fire and called in additional resources.”

No one was inside the three-story structure, which previously housed a low-budget hotel and ground-floor retail businesses. A sign for the now-defunct Goody-Goody nightclub remains on the front of the building.

Approximately 105 firefighters extinguished the blaze in 32 minutes. No estimate of damage and loss was available.