Defendant in arson spree found to be sane

A jury on March 5 found a German national sane when he ignited 47 fires in Hollywood, West Hollywood and other parts of Los Angeles over the New Year’s weekend from Dec. 29, 2011 to Jan. 2, 2012. 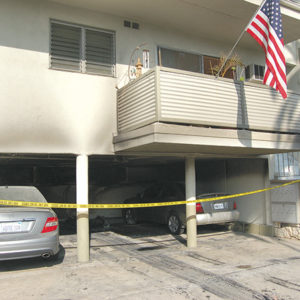 Harry Burkhart, 30, was convicted in 2016 of starting the fires, which primarily occurred in carports and subterranean garages at apartment buildings. Jurors deliberated for several hours before finding Burkhart sane.

The arson spree damaged numerous buildings in the local area, and Burkhart also struck in the San Fernando Valley. He was arrested on Jan. 2, 2012, by a reserve deputy from the West Hollywood Sheriff’s Station who pulled Burkhart over near Sunset Boulevard and Fairfax Avenue. The defendant was driving a minivan that had reportedly been near some of the crime scenes. Authorities found incendiary materials inside the vehicle.

Prosecutors said Burkhart started the fires as retaliation after his mother was arrested for alleged crimes in Germany and was deported. Burkhart and his mother Dorothee lived in an apartment on Sunset Boulevard, just east of West Hollywood.

Burkhart’s defense attorney argued that he suffered from mental illness.

A jury deadlocked in the sanity phase of the 2016 trial and a mistrial was declared. The conviction remained in place, however. State law required a second sanity phase, which began late last month.

A sentencing hearing is scheduled on March 23. Burkhart faces a maximum sentence of 88 years and eight months in prison.