High school students throughout Los Angeles County joined their counterparts across the nation for a 17-minute walkout at 10 a.m. on March 14, honoring the 17 victims who died in the Parkland, Florida, school shooting last month. 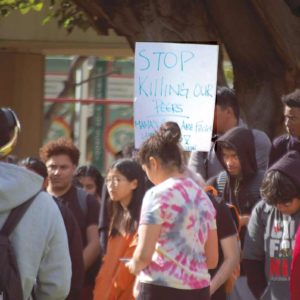 Students gathered in the quad at Fairfax High School during the 17-minute demonstration on Wednesday. (photo by Edwin Folven)

Beverly Hills Mayor Lili Bosse, holding a sign that read “enough is enough,” led hundreds of Beverly Hills High School students in a march through the school’s campus to the courtyard area in front of the Salter Theater.

She and a succession of high school students spoke on the steps of the theater, calling attention to gun violence in schools.

“School shootings are not normal,” said Penelope LaPaglia, a sophomore. “This is not how the world should be and we will not let this continue.”

The walkout was conducted with the district administration’s approval, and built into the school day.

During the previous day’s school board meeting, student school board member Jonathan Artal said the walkout would be “an opportunity for students to exercise their own voice.”

“Because students are the people who need to drive the change in this country,” he said.

The Feb. 14 shooting at Marjory Stoneman Douglas High School, in which 14 people were injured in addition to the murder victims, has ignited conversations among students, police and school officials in communities throughout the country. 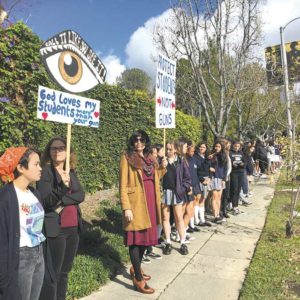 Students at Fairfax High School gathered in the school’s quad. Instead of walking into the community, the students were encouraged to demonstrate on campus, albeit behind a fence that kept them mostly obscured from public view.

“We generally encourage our students to practice safety but we also respect their rights to express themselves,” Principal Kenneth Adiekweh said. “[They’re] out here for 17 minutes, and that’s OK. We also gave them an opportunity to do things in class and share their thoughts. We are very proud of our students, but we want to keep them safe.”

A small group of media and other people gathered outside the fence surrounding the quad, including West Hollywood residents Rick Sparks and Jeff Olson, who came to support the students. Toward the end of the gathering, an officer from the Los Angeles School Police Department told those who had gathered to leave the campus because it is private property.

“We are showing support. It’s clear the politicians are not going to lead the way,” Sparks said. “It has to be grassroots. We are making a point of standing by the students.”

At Immaculate Heart High School and Middle School, more than 700 students joined with their peers across the country in a walkout. Accompanied by faculty and staff, the students streamed out of classrooms at 10 a.m. and carried signs denouncing gun violence.

Lining the sidewalks at the corner of Western and Franklin avenues, the students stood in silent protest for 17 minutes to honor the 17 students and teachers slain at Marjory Stoneman Douglas High School in Florida. Some of the signs the students carried named the Florida victims. Many of the young protesters were visibly moved to tears. Drivers at the busy intersection honked to show support. 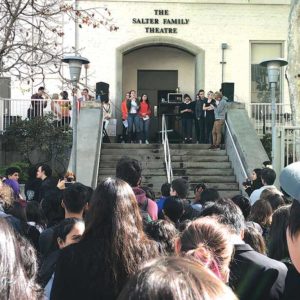 At the same time, a group of students stayed behind on campus to read aloud the names of each victim in the Florida school shooting, and placed a rose in a vase before offering silent prayers for all the victims and an end to gun violence.

The Los Angeles Unified School District dealt with its own school shooting nearly two weeks before the deaths in Florida commenced the nation’s latest partisan battle over gun control. At Sal Castro Middle School in Westlake, a 12-year-old girl brought a firearm to school and injured two students after it fired, reportedly by accident.

“We also want to assure all parents, students and staff that safety remains the top priority of L.A. Unified,” school board President Monica Garcia and interim Superintendent Vivian Ekchian said in a statement following the Florida shooting. “We continue to work with the Los Angeles School Police Department, along with public safety and mental health agencies, to ensure planning, preparation and response to incidents that may affect safety. In addition, we encourage everyone in our district to remain vigilant in working together to keep our schools safe – if you see something, say something.”

In the week leading up to the walkout, LAUSD administration asked students to remain on campus to remember the victims.

“Students have the right to freedom of speech, and they may participate in peaceful dialogue and activities on campus, within parameters set by their administrators,” Ekchian said. “We ask that parents talk to their children and encourage them not to leave campus. Our goal is to provide students with opportunities to express themselves in a safe manner that respects the school environment and all perspectives.” 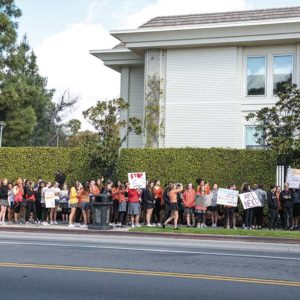 Marlborough School students participated in the March 14 National School Walkout, lining the Third Street sidewalk at Rossmore Avenue. The walkout was followed by an on-campus memorial recognizing the victims of Marjory Stoneman Douglas High School as well as past victims of school shootings. (photo by Ashley Myers-Turner)

LAUSD has had student walkouts of historic significance for other reasons. Fifty years ago, in 1968, approximately 15,000 students walked out of schools throughout the district to support Chicano rights. Leaders such as Cesar Chavez emerged during that decade’s civil rights movement.

The protests in Los Angeles this week over President Donald J. Trump’s visit to Southern California, for fundraising and viewing border wall prototypes, parallel another student walkout 12 years ago. In 2006, LAUSD students walked out to protest a House of Representatives bill that would have strengthened border enforcement between the U.S. and Mexico, along with other immigration reforms. The bill was approved by the House, mostly along partisan lines, but did not advance beyond the Senate.

Edwin Folven contributed to this article.