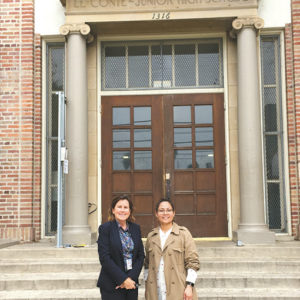 City Attorney Mike Feuer created the program in 2016 to ensure students attend school without fear of crime in the community. Neighborhood prosecutors work with community members, school officials, city partners and others to improve the quality of life around local schools.

Prosecutors help school administrators create comprehensive crime reduction strategies. The focus is to create a safe environment in the neighborhoods surrounding the schools for students walking to and from the campuses. Feuer also recently announced the formation of the Los Angeles School Safety Blue Ribbon Panel, which will meet soon and develop additional strategies for keeping school’s safe, particularly in the wake of recent school shootings.

“Nothing is more important than keeping our kids safe and secure,” Feuer said. “Now is the time to take a fresh, focused look at how we are doing and how can we do it better.”

The Neighborhood School Safety Program focuses on the infrastructure around schools, prosecutions and relations with community stakeholders. With infrastructure, the city attorney’s office works to deter graffiti, vandalism, littering and other nuisance-type criminal activity. The Los Angeles Department of Water and Power has committed to improving lighting around campuses. Since 2016, street lighting has been improved near 100 schools.

The program also partners with the Los Angeles Department of Transportation on its “Safe Routes to School” initiative, in coordination with LAUSD, to install new signage, pedestrian crosswalks, stop signs and traffic signals. One such project was implemented near Hollywood High School and Selma Avenue Elementary School last year.

Anyone who is interested in joining the Neighborhood School Safety Program is encouraged to email Deputy City Attorney Sharee Sanders Gordon at sharee.sanders.gordon@lacity.org, and Jackie Lawson at jacquelyn.lawson@lacity.org.