Body that was found adds to furor over encampment

Los Angeles County Coroner’s Office officials are investigating the death of a man whose body was found on March 27 in a homeless encampment on Poinsettia Place between Romaine Street and Willoughby Avenue. 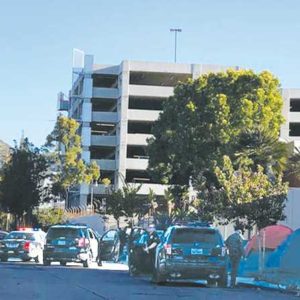 Officers investigated a death on Tuesday at a homeless encampment on Poinsettia Place. (photo by Peter Nichols)

The coroner’s office has not formally issued a cause of death or identified the man, but a police officer familiar with the encampment said she had previously contacted the man and he suffered from medical issues. Foul play is not suspected and authorities believe the man, who was in his 40s, died of natural causes.

Senior Lead Officer Inga Wecker, of the Los Angeles police Department’s Wilshire Division, said a resident flagged down a patrol car in the area on the morning of March 27 and notified officers about the body. The situation is the latest involving the homeless encampment on the sidewalk on the east side of Poinsettia Place, across the street from the east side of Poinsettia Park.

Last week, residents of the Melrose area gathered for a meeting at the park and vented frustrations to police and city officials. They claim homeless individuals regularly fan out into the neighborhood and trespass on private property, commit burglaries, and urinate and defecate in public. The Los Angeles Department of Sanitation removed property from the site last week, but the tents and people were allowed to remain because they require 72-hour notice before they can be permanently removed. Crews planned to return last Thursday but did not remove the encampment because of heavy rains forecast last weekend. A new cleanup date is expected to be scheduled soon, Wecker said.

Police are also frustrated by crime related to the encampment, she added, but have limited options. People are allowed to have tents up on public property from 9 p.m. to 6 a.m., but they must be removed during other hours. The tents are allowed under a settlement in a lawsuit filed against the city by the ACLU.

Wecker said officers cite people who refuse to collapse their tents during the day after warnings are issued and people living in the encampments are checked for criminal warrants. Two people staying in the encampment have been arrested for burglary over the past couple weeks, Wecker added.

She encouraged people to call 911 when they observe a crime in progress and to call the police station if they suspect someone from the encampment has committed a crime. Officers follow up on all reports, Wecker said, but it can often be difficult to identify a particular suspect. She said the LAPD has a group of officers who routinely stop at encampments in the area with representatives from the Los Angeles Homeless Services Authority and other agencies in an attempt to find homeless individuals help. Councilman Paul Koretz, 5th District, is also examining options for having the encampment permanently removed.

“Believe me, this has really added a big chill to the whole situation,” Nichols added.

‘Pacific Rim: Uprising’ insults the memory of a once fun film series