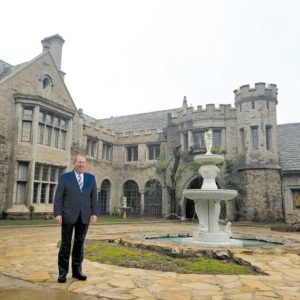 Through a covenant, Metropoulos formalized that he will not demolish the main residence and will repair and maintain the façade as part of planned renovations. The permanent protection covenant will remain with the property regardless of future owners. The Playboy Mansion, formerly owned by the late Playboy Magazine publisher Hugh Hefner, is located on Charing Cross Road in Holmby Hills, just off Sunset Boulevard and north of Beverly Hills.

Built in 1927, the mansion was constructed in the 14th century Gothic-Tutor style. It was originally designed for the son of Arthur Letts, the founder of the Broadway department store.

“The significance of the property to Los Angeles’ history actually starts with the Letts family and shouldn’t be forgotten,” Koretz said. “We are all very grateful to the Holmby Hills Homeowners Association for spotlighting this property as a cornerstone of the founding of Holmby Hills and surrounding neighborhood. Moreover, we are pleased that Mr. Metropoulos shares our respective interest in protecting the architectural visionaries of the past that will permanently remain to benefit all lovers of Los Angeles history for years to come.”

Playboy Enterprises acquired the property in 1971. Metropoulos, 34, whose firm has owned Hostess Brands and Pabst Brewing Company, purchased the mansion in 2016. Metropoulos allowed Hefner to remain in the residence until he died in September 2017.  Metropoulos has lived next door to the mansion since 2009, when he acquired a sister house built by the Letts family two years after the mansion.

Metropoulos has restored his home and property, which are adjacent to the Los Angeles Country Club and include the original gate that connects to the Playboy Mansion.  He intends to combine the two properties to create a 7.3-acre compound and one of the largest estates in Los Angeles.