‘Walk With the Mayor’ highlights Alzheimer’s 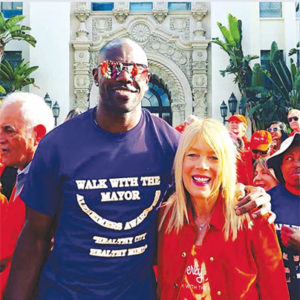 The city of Beverly Hills held a special “Walk With the Mayor” event on Feb. 12 with an Alzheimer’s awareness theme. Participants walked to the offices of the Alzheimer’s Association California Southland Chapter and Sunrise Senior Living in Beverly Hills, where they learned about free resources. Alzheimer’s disease is the sixth leading cause of death in the United States, and the cost of caring for people with the disease was estimated at $259 billion in 2017, according to Negar Kamara, who organized the event after her father in law died from Alzheimer’s disease. Beverly Hills Mayor Lili Bosse was joined by NFL Hall of Fame player Terrell Owens, who participated in support of his grandmother Alice Black. For information, email Negar Kamara at nkamaraesq@aol.com.