Sometimes knowing nothing is better than knowing. That’s the unfortunate takeaway from “The Cloverfield Paradox,” the third entry in a sci-fi series that refused to be labeled. Until now. 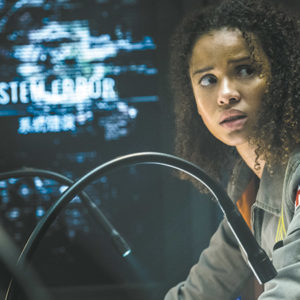 (Gugu Mbatha-Raw stars as Hamilton in “The Cloverfield Paradox,” a disappointing third installment to the series.)

So many answered questions established in the previous two films. And in so doing, the mystique lifts and “Cloverfield’s” aura diminishes. A missed opportunity, certainly, but I must admit this one remains entertaining nonetheless, a smart film undone by a few key moments.

Without a clear connection to 2008’s “Cloverfield,” a found-footage monster movie, and 2016’s “10 Cloverfield Lane,” a sorta sequel that spends most of its run in an underground bunker, the third installment begins as a familiar bedfellow. Following years of neglect, Earth is in the middle of an energy crisis, but Hamilton (Gugu Mbatha-Raw) and a team of scientists volunteer to test a new, unlimited source on the Cloverfield Station in space. If they succeed, they’ll prevent global war, but this blinds them to one possible problem: the Cloverfield Paradox.

Some naysayers believe the station’s particle accelerator can fracture reality: dimensions collide and unknown creatures find their way to our reality. That’s crazy talk. Of course it happens.

If you’ve ever wondered how the previous “Cloverfield” films connect, the third installment has all the answers you never needed. Shame too, considering how much producer J.J. Abrams and Netflix banked on a little marketing ploy on Sunday. Without any trailers or pre-screenings for critics, Netflix dropped a teaser for the film during the Super Bowl, informing viewers it would go live immediately after the big game. Brilliant move. And that teaser reveals all kinds of goodies ready for exploration after all those Tide ads.

This is all in line with “Cloverfield’s” legacy. Abrams always kept these projects hush-hush, requiring actors to stay quiet and revealing even less in each piece of viral marketing. So why not go for broke, no promotion, let the public jump in. It’s especially effective if the film already had a rough production history and was sold from Paramount, unsure if it would survive much bad press.

We’ve seen this story before. “Alien,” “Life,” “Event Horizon.” It’s a dated formula: space crew experiences an anomaly, they explore it further, slowly the crew gets picked out, tack on a life lesson about the hubris of humanity. But for brief moments, “Paradox” introduces some original ideas, particularly what happens when realities converge (one scene with a sentient hand sticks out).

And how often does a sci-fi film feature a black female lead? Mbatha-Raw belongs in leading roles, and thank H.G. Wells, we’ll see her soon enough in another sci-fi film, “A Wrinkle in Time,” a Disney adaptation of Madeleine L’Engle’s amazing children’s book. “Paradox” even offers solid performances from David Oyelowo (MLK in “Selma”) as Keil the research team leader, and Chris O’Dowd as Mondy the mechanic.

The rest of the team, however, are wasted opportunities. Ziyi Zhang (“Crouching Tiger, Hidden Dragon”) deserves more than she receives here. Daniel Brühl’s Schmidt is rather vanilla. And Elizabeth Debicki as Jenson, while closer to a fleshed-out character, is mostly a mixed bag.

And then we come to the odd decision to include an entire subplot about Hamilton’s husband back on Earth, Michael (Roger Davies), which only seems to exist for a limp twist that’s disappointingly predictable. This is likely an add-on to establish the “Cloverfield” connection, likely not part of the film years ago when it was originally called “The God Particle.”

Which leads us to the ending. A horror film lives and dies on those concluding moments. Sure, the final girl can die, but the film better make sense, have a point, resist a knee-jerk tactic for its own sake, etc. “The Cloverfield Paradox” doesn’t wrap things up in a satisfying way. We need this ending about as much as “Alien: Covenant” needed to provide us all a tidy explanation for how the xenomorph came to be.

I see no reason “Cloverfield” can’t recover and provide more original sci-fi and horror cinema. At worst, this film is a hiccup, a lukewarm installment easily watchable and forgotten soon after. Many “threequels” do much worse (“Spider-Man 3,” “Alien 3,” “The Godfather Part III”). The real affront is how much it tries to tell all in a franchise built on ambiguity, often requiring true believers to put the pieces together themselves. That’s the betrayal at work here.

Love is in the air at Jean-Georges Beverly Hills