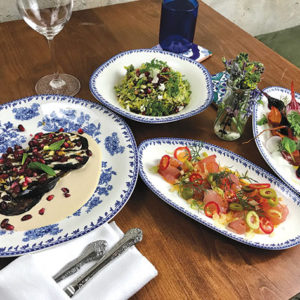 Jaffa focuses on old and modern Israeli dishes with a California twist. (photo by Jill Weinlein)

The inspiration for Jaffa came from Conness and executive chef Santos Navarro, who, after a trip to the Israeli city of Tel Aviv and its ancient neighborhood Jaffa, knew they had to bring the colors and flavors of the cuisine back to Los Angeles. Upon finding their location on Third Street, the pair hired Manuel Mesta of the Patina Restaurant Group as the general manager and Aly Iwamoto as the lead bartender.

Iwamoto’s full bar and cocktail program draws from popular Middle Eastern produce. She makes a fresh fig cocktail mixed with bourbon, Jamaican rum and bergamot bitters, as well as a roasted barley cocktail of tequila, mezcal, pineapple and turmeric for a sweet and spicy finish. I tried her olive martini, a delicious mix of dry vermouth, Benedictine, rosemary oil and lemon bitters. Iwamoto also offers a few nonalcoholic cocktails, including the new fashion’d.

For food, we started our evening with a variety of “salatim,” or Israeli cold dishes, that included a colorful slaw of Brussels sprouts, chunks of feta, chopped walnuts and light date vinaigrette. The dish dazzled with bright red pomegranate seeds.

Another plate featured roasted beets – roots still intact – on top of a tangy, thick and creamy yogurt cheese known as labneh. Sliced radish and a sprinkling of herbs brought additional zest to the plate.

Conness makes a classic Lebanese gattoush salad made with chopped red and yellow tomatoes, mixed greens and chunks of cucumbers. I particularly enjoyed the crunchy pita chips on top and light sumac vinaigrette dressing. The warm, puffy pita bread at the table also paired well with these dishes.

My favorite plate, however, was the mildly charred, soft eggplant slices on top of tahini, a pleasing purée of sesame seeds mixed with lemon juice and garlic. Pomegranate seeds, chopped pistachios and just a dash of date syrup rounded out this delicious cold salad.

I also tried the Kubaneh bread, which resembles parkerhouse rolls in how you can pull it apart. The spongy bread was glazed with green zhug, a Yemenite hot sauce made with cilantro and parsley, for added tang.

Entrées shared around the table included a colorful array of roasted root vegetables with a spicy harissa vinaigrette and a smear of avocado hummus. The roasted Jidori chicken was surrounded by a medley of chopped dried apricot, roasted cipollini onions, olives and rice pilaf.

Even though I am not usually a fan of lamb, I really enjoyed the roasted lamb with couscous sweetened with dried figs and lemon peel on a Palestinian vegetarian maftoul salad. Chopped raisins, mint, cucumber, onions, parsley and spices sprinkled on top packed in a lot of flavor to the dish as well.

We also had the opportunity to try shots of arak distilled in Lebanon. One sniff and I smelled a strong and pleasing anis aroma. After shouting “l’chaim,” I enjoyed the strong, clean licorice flavor that offered a lingering aftertaste.

To wrap up the meal, slices of a beautiful chocolate tart decorated with pomegranate seeds were brought to each of us. Made with coconut milk and an almond-oak-date crust, the dessert appeases vegans and nonvegans alike. Pastry chef Natasha MacAller also brought out a wonderfully sweet hamantaschen pastry made with marzipan, sliced apples and poppy seeds, and dotted with frozen yogurt.

Jaffa offers a kaleidoscope of colors and pleasing flavors in each thoughtfully executed dish. The chefs use fresh vegetables for vegan and vegetarian fare, along with well-raised meat and sustainable seafood. Open for dinner with lunch scheduled to begin this week and brunch to follow soon. $$ 8048 W. Third St., (323)433-4978.

I found my heart in San Francisco