Suspect wanted for unprovoked attack on elderly woman in Koreatown

An unknown suspect is being sought for what authorities described as a “brutal assault” of an 86-year-old woman on Feb. 10 in Koreatown. 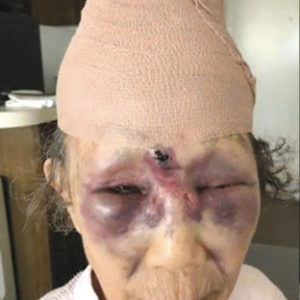 The victim was walking alone at approximately 1:25 p.m. on Olympic Boulevard near Vermont Avenue when a male suspect approached from behind and struck the woman. Police released a photograph of the victim, Mi Reum Song, who fell and struck her head. The victim sustained severe facial bruising, and lacerations to the front and back of her head.

“The guy just came up and hit her once in the head with an open hand,” LAPD spokesman Luis Garcia said. “She fell to the ground and the suspect ran away. Paramedics were called and transported her to a local hospital.”

No motive for the assault has been established. The suspect was described as a Hispanic man in his mid-30s, approximately 5 feet 5 inches tall and 150 pounds. He was wearing black clothing and was last seen running east on Olympic Boulevard.

Security video that captured the alleged suspect running away can be viewed by visiting lapdonline.org.

Anyone with information is urged to contact Det. Hee Bae Cho at