The Beverly Hills Unified School District entered into a contract with the city of Beverly Hills and contractor ARB for the operation and abandonment of oil and gas wells next to Beverly Hills High School. 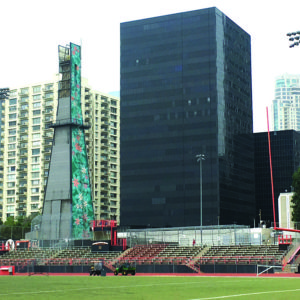 The Beverly Hills Unified School District has been working with the city to maintain the safety of the site since Venoco left. (Park Labrea News/Beverly Press file photo)

The district’s Board of Education unanimously approved the contract at its Feb. 27 meeting. The city approved the agreement last week as part of its effort to assist with the plugging and closing of 18 oil wells on the high school campus. According to the terms of the contract, the city will pay ARB up to $7 million.

“I’d like to thank the city for partnering with us and ARB in getting this oil well remediated,” school board member Noah Margo said.

Oil and gas drilling company Venoco leased the site of the wells until the end of 2016. A city ordinance passed in 2011 required oil wells to discontinue operation in 2016. Venoco made plans last year to vacate the site and cease its monitoring responsibilities after the company filed for bankruptcy.

Beverly Hills city and school district officials appealed a decision by the U.S. Bankruptcy Court for the District of Delaware to allow Venoco to leave the site on July 1 without decommissioning the site in accordance with state and local law. District contractors began monitoring the site after Venoco’s departure, and the district began working with regulatory authorities to complete the decommissioning.

“With the agreement, the parties avoid costly, lengthy litigation, and instead direct the limited resources of the estate to the safe, secure decommissioning of these facilities by the city and the district. Venoco will continue working with regulators and stakeholders to ensure the safe transition or wind-down of its assets,” Bret Fernandes, Venoco’s chief restructuring officer, said after the settlement was announced.

“The complexity is magnified by the circumstances in which [Venoco has] already transitioned off the drill site, terminated their field employees with experience operating the drill site … and are poised to wind down in the near term,” according to the document.

It also mentioned Venoco’s “insufficient workforce” as reason why it wouldn’t be feasible for the company to maintain a presence at the Beverly Hills drill site.

“In stark contrast to the complex, costly and time-consuming alternative of continued litigation, the agreement simply and fairly defines the parties’ rights and obligations and resolves all issues with finality and in the immediate term.”

The district has maintained its commitment to keeping the site safe.

“The city has been helpful and kept us informed, we’ve kept them informed, it’s been a very fruitful, successful partnership,” school board President Lisa Korbatov said at this week’s school board meeting.

Sign up to participate in the Race for the Cure